A US court upheld the lawsuit brought by hundreds of sailors exposed to radiation as part of the response to the Fukushima Daiichi disaster. The lawsuit originally was just against TEPCO. Along with this news that the district court has upheld the suit so it can move forward, the cause now includes GE, Hitachi, Ebasco and Toshiba as defendants. The list of new defendants includes all the parties involved in the design and construction of the reactors at Fukushima Daiichi. Greenpeace had previously brought this issue up, that the designers and construction companies responsible for the failed plant should be held liable for the massive failure during the disaster.

(Press Release via Nuclear Hotseat from the lawyers handling the case)

U.S. Navy Sailors have won a crucial battle in the United States District Court in San Diego against Tokyo Electric Power Company, known as TEPCO. A Federal judge has ruled that the sailors’ class action law suit may go forward against TEPCO and additional Defendants General Electric, EBASCO, Toshiba and Hitachi, the builders of the Fukushima nuclear reactors. The 200 young sailors claim that TEPCO deliberately lied to the public and the U.S. Navy about the radiation levels at the Fukushima Dai-Ichi Nuclear Power Plant at the time the Japanese Government was asking for help for victims of the March 11, 2011 Earthquake and Tsunami. Up to 70,000 U.S. citizens were potentially affected by the radiation and will be able to join the class action suit.

The lawsuit is based on the sailors’ participation in Operation Tomodachi (meaning “Friends”), providing humanitarian relief after the March 11, 2011 devastation caused by the Earthquake and Tsunami. The lawsuit includes claims for illnesses such as Leukemia, ulcers, gall bladder removals, brain cancer, brain tumors, testicular cancer, dysfunctional uterine bleeding, thyroid illnesses, stomach ailments and a host of other complaints unusual in such young adults. The injured servicemen and women will require treatment for their deteriorating health, medical monitoring, payment of their medical bills, appropriate health monitoring for their children, andmonitoring for possible radiation-induced genetic mutations.

One Sailor, age 22, has been diagnosed with Leukemia and is losing his eyesight. In his declaration to the court he states, “Upon my return from Operation Tomodachi, I began losing my eyesight.I lost all vision in my left eye and most vision in my right eye. I am unable to read street signs and am no longer able to drive. Prior to Operation Tomodachi, I had 20/20 eyesight, wore no glasses and had no corrective eye surgery. Additionally, I know of no family members who have had leukemia.” Paul Garner and Charles Bonner, attorneys for the sailors, say that additional plaintiffs are continuing to come forward with serious ailments from radiation.

The sailors would like the general public to contact their members of Congress, locally elected officials, and President Obama and implore them to tell the Government of Japan to (1) apply the principles of “Operation Tomodachi” to the Plaintiff-victims and help these U.S. Sailors; and (2) tell TEPCO to stop shirking responsibility for their publically acknowledged wrongdoings.
fukushimaradiationvictims.net EMAIL: daryljbrooks@roadrunner.com 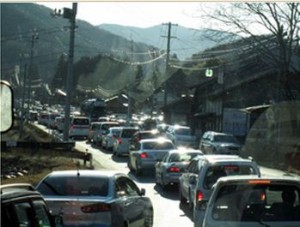