Reactor related decommissioning will be part of the long term plans for Fukushima Daiichi. Considerable research is needed before actual work can be implemented. Some of the aspects of these decommissioning technologies are explained here. Much of the information is contained in these IRID planning documents. More information will be added here over time and in the other sections under decommissioning on the website.

Fuel Debris:
IRID has been conducting a considerable amount of fuel debris related research through various agencies and research facilities in Japan. No sample of actual fuel debris has been retrieved from the melted down reactors at Fukushima Daiichi. Instead, research has been going on based on known factors of the meltdowns to try to estimate the composition of the fuel debris. Significant research has also been underway to try to determine a method to remove the fuel debris. The initial plan to flood the reactors and remove fuel from the top refueling floor is still considered but an alternate plan to remove fuel debris without flooding the reactors is also being looked at. Since just about every penetration point inspected so far on the containment structures has been found to leak to some extent this is raising doubts about the ability to flood the containment vessels. IRID has taken a more diverse approach to solving the problems than TEPCO’s “one plan” method that has repeatedly left them without another option when the one plan fails. Exactly how they plan to retrieve the fuel will be determined by 2018. METI presented this simplified timeline for fuel removal research in July of 2014. 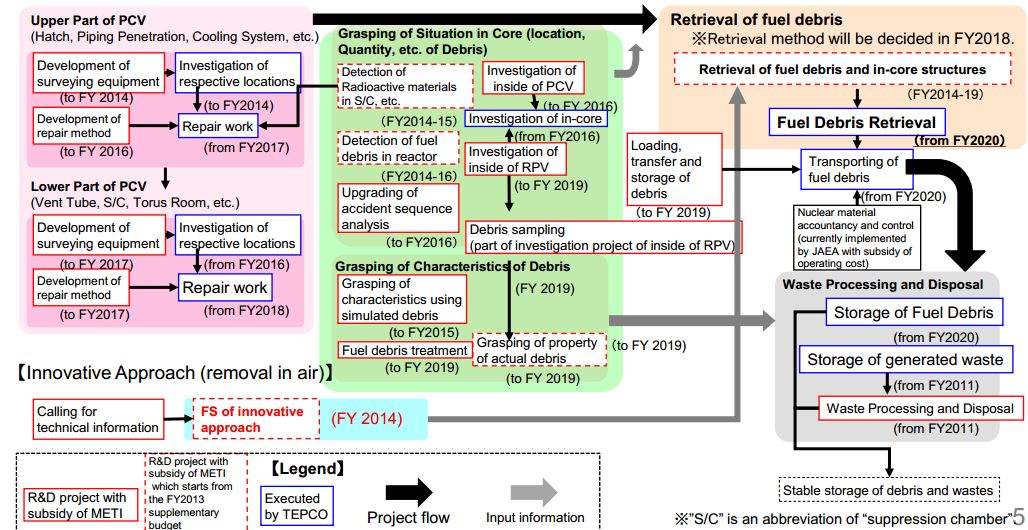 Fuel Debris Research:
To better understand what the fuel debris may be like, work is underway to estimate the composition of the melted fuel by trying to recreate it in a laboratory. This could give researchers an idea of possible criticality risk and how to best handle debris for removal and storage. The current premise being used for research purposes involves an estimate that unit 1’s fuel has melted partially through the control rod mechanisms and partially burned through the cement floor of containment. IRID does not cite a reason or source for this estimate. JAEA is doing much of this research work currently. 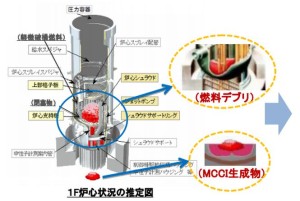 Three mile island is frequently referenced as they develop fuel removal plans. This cutting head from TMI is one example they cite as possible technology to use.

The timeline below is a rough estimate from IRID for fuel removal research and implementation using unit 2 as their example. 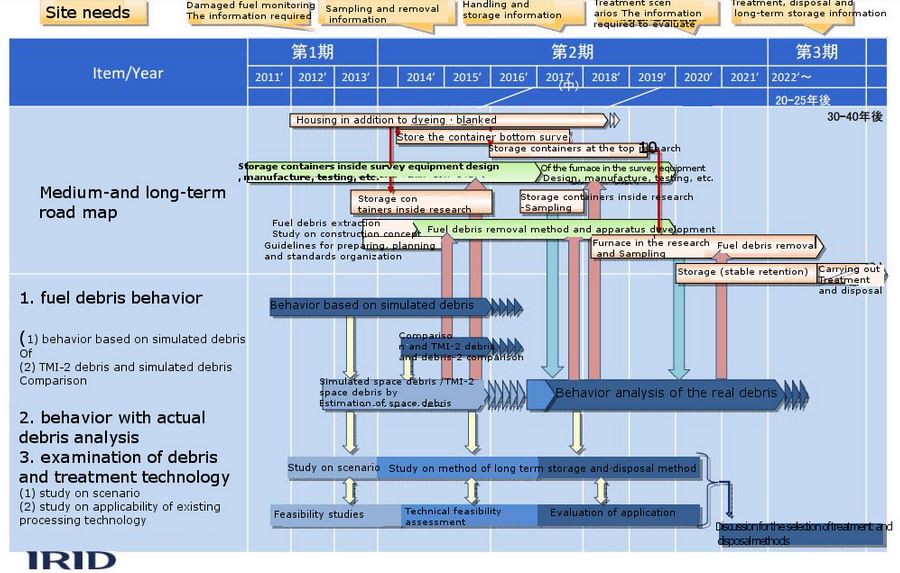 JAEA is working on both fuel composition research and development of a fuel removal jig. Starting with debris samples from TMI, researchers are building a fuel debris characteristics database. They will add findings from their simulated debris research to try to estimate the properties of the melted fuel in the reactors. Based on this work, further research will be done to develop cutting or grinding heads to cut apart the melted fuel.

Researchers are looking at things like the ratio of uranium to zirconium and iron in the melted fuel. Initial research indicated that higher iron content resulted in a harder material. The impact of hydrogen peroxides, boric acide and pure water were also tested. One finding mentioned is that MOX fuel the melting temperature had a relation to how much zirconium would be in the melted material. Tests with ratios of gadolinium were also conducted. Once all of the potential interactions are understood that work will be used to develop a more detailed fuel removal plan. 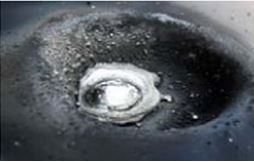 Melted fuel reaction with concrete, simulated in a lab as part of fuel debris research.

The Japanese research teams will also be working with France’s CEA (energy dept) to research further on certain aspects of fuel composition and the involvement of melted fuel and concrete as it will relate to fuel debris that will need to be processed.

Fuel Debris Removal:
In January 2014, IRID put out a worldwide request for information to solicit ideas including ways to remove fuel debris without flooding containment. 194 submissions were received, these included ideas for inserting monitoring and investigation equipment, ways to access the fuel debris in containment and methods to remove it. Research projects were requested for a number of concepts related to fuel debris cutting, collection and removal. 50 million yen of government money was allotted to conduct this research.

Some major challenges that have yet to be addressed include how to get to the fuel around difficult internal structures such as the control rod mechanisms, steam dryers and other equipment that may get in the way. The interior of the containment structures is actually quite crowded, this will create considerable challenges for fuel removal. If containment is not flooded for fuel removal they will also have to determine a way to keep down radioactive material and dusts during the work. Other issues listed include how to pass fuel canisters into and out of the containment structure and how to work around the existing internal equipment that will be in the way.

One alternative removal method being considered involves sending robotic equipment in through side access hatches to work in containment. Fuel debris may be cut to pieces small enough to fit into fuel canisters. Preventing criticalities and keeping radioactive dust down while cutting fuel debris are noted as challenges. 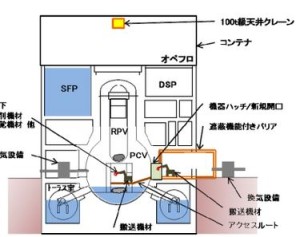 IRID mentions that they do not know the exact location and composition of the melted fuel but assume it to be partially in the reactor vessel and partially in the containment structure. It is also mentioned that fuel had higher concentrations that the fuel from TMI. Seawater is also mentioned as a compounding factor in accelerating corrosion inside the containment structures.

Fuel Debris Processing & Storage:
Fuel processing and handling is assumed to be for 50 years after removal. Options being considered include direct disposal, solidifying the material in glass, two “wet” processing methods and a “dry” electrolytic process to deal with the fuel debris. Some issues mentioned with direct disposal included instabilities within the melted fuel that could cause problems over time if the chemical composition or other factors change. Processing methods come with technical challenges, higher costs and additional waste generation. In addition to the other challenges there is concern that the Fukushima fuel will have heat generation, corrosion and hydrogen generation issues that need to be considered as part of the development of fuel debris cans. It is assumed that Fukushima fuel cans will have to be remotely handled through the process.

Two existing cask designs are being considered for long term fuel debris storage. NFT-38B and NFT-14P storage casks are being considered. IRID does mention that one fuel debris “can” could be fitted in each cask. There is at least a working assumption that these casks would be stored in a concrete bunker system similar to how spent fuel is stored. 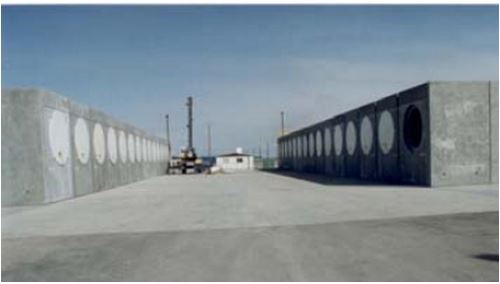 Concrete bunker storage of TMI fuel at Idaho National Lab. IRID is considering a similar set up or possibly one that is underground.

The diagram below outlines the process used for TMI fuel debris as it was handled at TMI and later at Idaho National Lab. This is the starting point IRID is using to come up with a similar plan for Fukushima Daiichi. 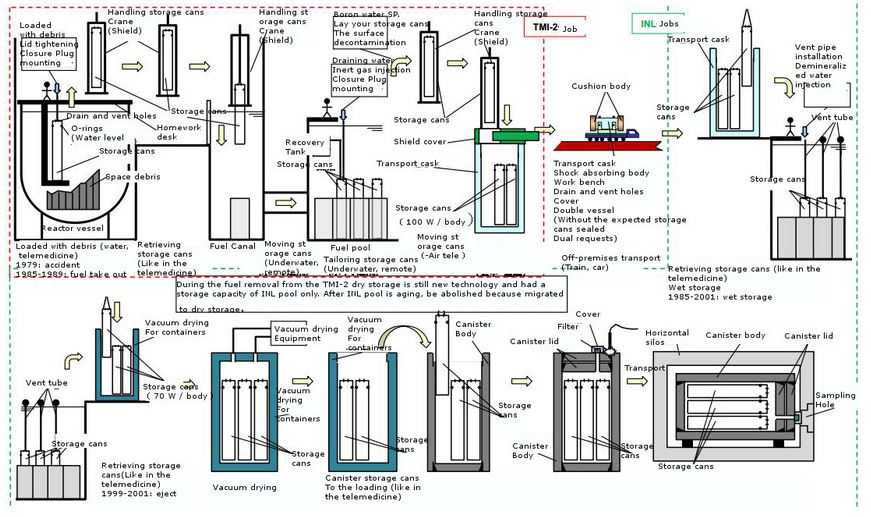 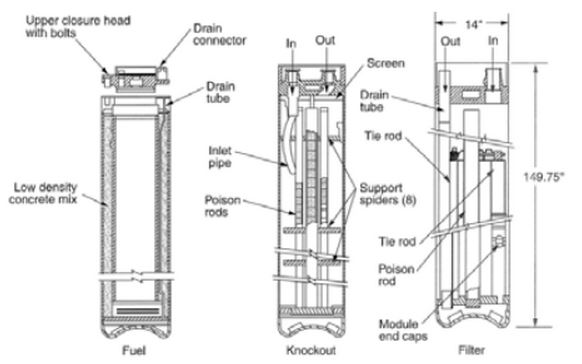 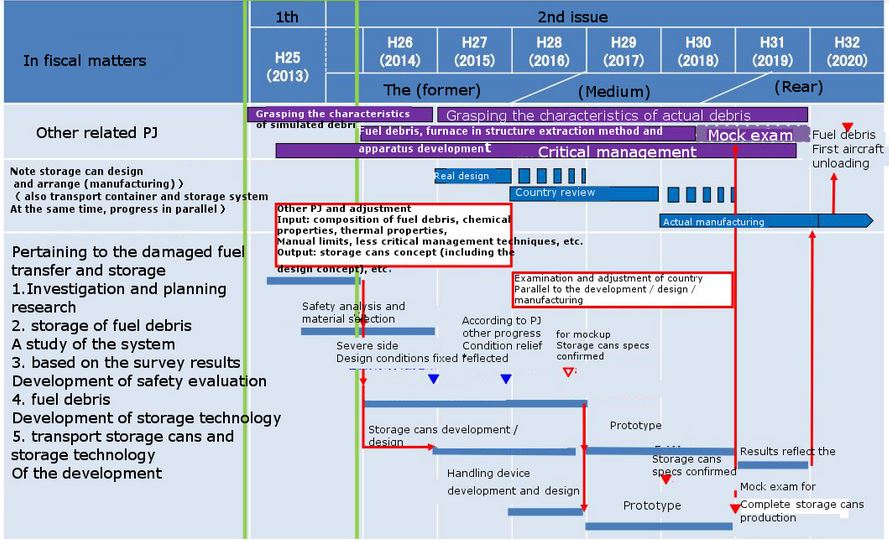 Containment research:
Work already completed on the unit 1 torus room showed that bellows joints in vacuum breaker tubes were leaking and that these systems had other damage. These are now added to places where remediation would be needed to seal off the structures if they were to flood the containment for fuel removal. It was also discovered that pipe penetrations between the torus room and the turbine building had minor leaks. 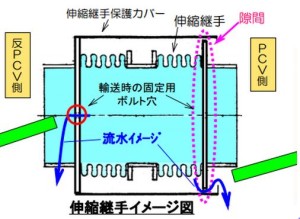 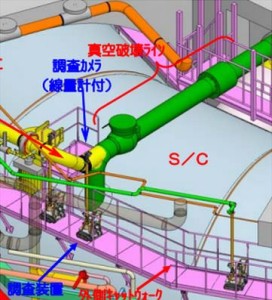 Vacuum breaker pipe above the torus 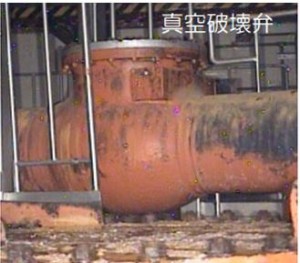 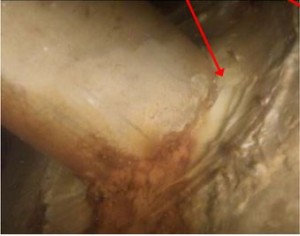 Leak in pipe penetration of torus room to turbine building in unit 1.

A series of research activities and testing are currently underway as of July 2014 to come up with a technology to seal upper containment penetrations with a focus on how to seal bellows joints. Bellows joints are frequently used to give pipes the ability to expand, flex and move without breaking. Options being tested to seal these joints are various types of silicones and polymers that could be injected or sprayed onto the bellows joint to create a seal. One material mentioned is referred to as “Line X”, this may sound familiar as the company makes both industrial sealants and truck bed liner sealants. The materials tested so far were tested against water pressure of 0.45 MPa and 104 Grays of radiation. Both a polymer and a polyurethane material tested passed the pressure and radiation tests.

There were however, challenges caused when used in pipes with grease, dirt or corrosion that prevented a complete seal.

Sealing pipes from the outside was also tested. This resulted in some issues with voids when injected between two pipes and inadequate seals when coating a pipe joint. With these outer sealing techniques, rust, dirt and grease are cited as causing problems, requiring more research. The plan is to continue working on these concepts to develop ways to deal with the drawbacks. 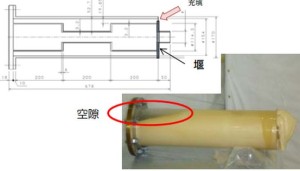 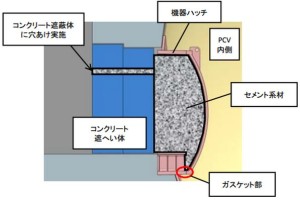 They will need to install equipment to do the following:

Transport controls involve limiting and anticipating worker exposures. This also involves planning out how equipment will be moved in and around the building.

Ventilation systems different from the current temporary systems in place will be required for the decommissioning effort.

The current nitrogen injection and purge system shown below would be the starting point for designs to be used during fuel retrieval. 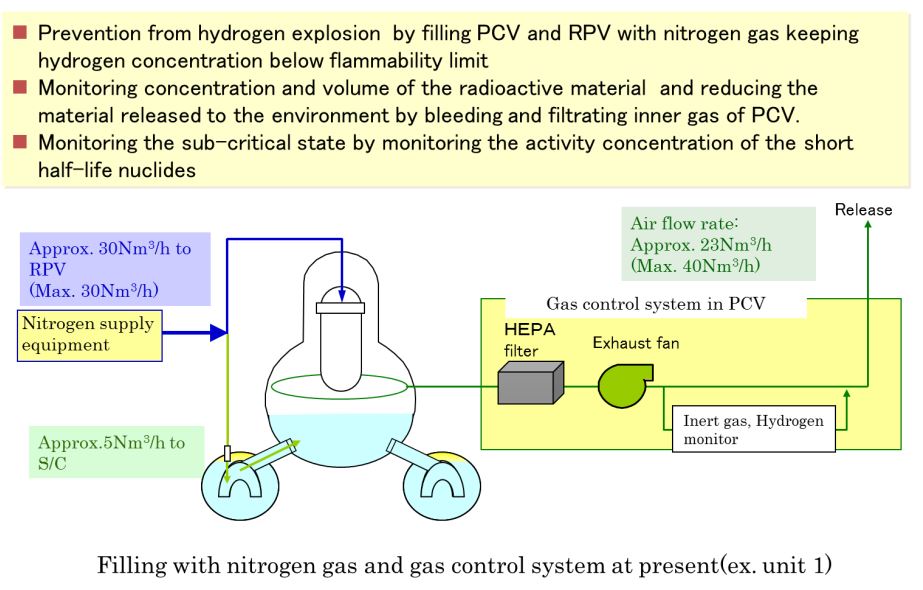