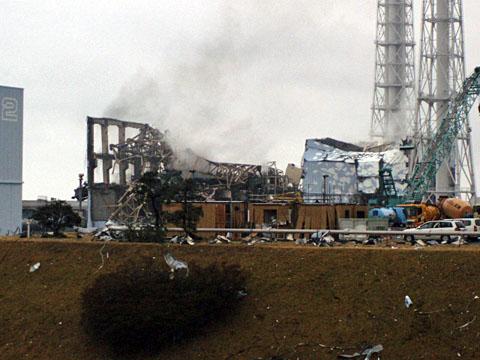 On March 11, 2011, Fukushima Prefecture in NE Japan was hit by the 9.0 magnitude Tohoku Quake, in Japanese the 東北地方太平洋沖地震 (Eastern Japan Great Earthquake Disaster), possibly the biggest earthquake ever to hit Japan. It struck at 2:46pm with a magnitude of 9.0—a level of 7 on the Japanese earthquake scale.

At 3:52pm all but one of the emergency diesel generators at the Fukushima Dai-ichi (No. 1) nuclear power plant were knocked out by a tsunami exceeding 45 feet. The power outage led to a series of crises at each operational reactor and four of the six Spent Fuel Pools (SFPs).

Since then it has been a constant struggle to regain control over a site with 6 reactors, three with reactor cores TEPCO finally admitted have been melted down since March 16th, and seven spent fuel holding pools containing (or trying to) thousands of tons of highly radioactive nuclear fuel. The site has experienced at least three explosions, recurring fires and major radiation leaks into the sea and into a countryside half-evacuated amidst a backdrop of tsunami destruction. Flooding with water to keep the damaged reactors cool has resulted in over 90,000 cubic meters of radioactive water, which must now be removed, or dumped into the sea. Think of an olympic-size swimming pool, the big ones, not the half-size.  Now think of 36 of them, because that’s how much water they have to lose.

There are few times when so many compelling news stories converge into the same story. Any of the three stories, the 9.0 Tohoku Earthquake, or the 45 foot tsunami, or the nuclear plant disaster, is by itself a major, story-of-the-year story. So what are we to think when, in the very heart of this crisis, the news media everywhere drop their coverage of it? Three reactors on a single site were rated a level 5 INES incident, equivalent to Three Mile Island, but compounded here by massive amounts of highly radioactive uranium nuclear fuel in damaged swimming pools. Why was this not news? And when the level was finally raised to INES Level 7, equivalent to Chernobyl, why was Charlie Sheen’s self destruction more important?

This group was born of a common desire to sift through the obfuscation and find the truth that was being hidden from us.  This website is where we post the results of our ongoing investigations.