An article by Richard Muller at the WSJ has been making the rounds, lauded by the nuclear industry and creating consternation all over.

The article created quite a bit of outrage and offense in the condescending tone and authoritarian declarations over a situation that is still very much in flux. The claims made by Muller, no matter who delivers them are deceptive in presentation and factually inaccurate.

The article declares Denver’s natural background radiation level and compares it to Fukushima. The ICRP guidelines cited in the article for intervention among civilian populations are incorrectly interpreted and mis-applied.

Background radiation primarily constitutes natural sources like radon or building materials. The excess radiation Denver has is due to elevation and is caused by cosmic radiation. Cosmic radiation has nothing to do with fallout from a nuclear accident. Background radiation is not intended to be a post accident level of fallout. The “Denver-Fukushima” comparison is quite inaccurate. The Denver example is admitted in the article to be from totally different radiation sources than Fukushima yet the article persists with the comparison, more on this in a bit.

Denver’s .3 rem/year is from completely different sources of radiation, different isotopes and largely from natural external sources. Fukushima’s internal and external artificial radiation exposures are from sources such as cesium 137 & 134, strontium 90 & 89, plutonium, cobalt 60, iodine 131 and a laundry list of other man made radioactive soup that Fukushima Daiichi spewed all over northeast Japan and the Pacific ocean. As testing has begun on those exposed, NGOs and experts are trying to find clues to the exposure paths for residents.

Muller makes this statement in his WSJ article:

“But over the following weeks and months, the fear grew that the ultimate victims of this damaged nuke would number in the thousands or tens of thousands. The “hot spots” in Japan that frightened many people showed radiation at the level of .1 rem, a number quite small compared with the average excess dose that people happily live with in Denver”

The article claims “hot spots” at a level of .1 rem. Levels of air dose radiation all over Japan and in the evacuation zone vary widely in radiation level. This statement is entirely too vague to actually mean anything and is without any proof or qualification what exactly is being referred to. If it refers to the recent JAMA letter about Minamisoma exposure scans, it would be wrong. We explained in a previous article that the Minamisoma scans are only a very small part of the total exposure to people at that location. We also point out here in a dose reconstruction exercise if these human exposures are believed to be initial exposures only, they would be considerably higher than 1 mSv/year. These exposures in Minamisoma are possibly a combination of initial exposure and ongoing re-exposure.

“Two workers at the reactor were killed by the tsunami, which is believed to have been 50 feet high at the site.”

The article goes on to try to discredit evacuations and Japan’s decision to shut down their nuclear plants (two have restarted).

“But over the following weeks and months, the fear grew that the ultimate victims of this damaged nuke would number in the thousands or tens of thousands. The “hot spots” in Japan that frightened many people showed radiation at the level of .1 rem, a number quite small compared with the average excess dose that people happily live with in Denver.”   “it is hard to resist the conclusion that the policies enacted in the wake of the disaster in Japan—particularly the long-term evacuation of large areas and the virtual termination of the Japanese nuclear power industry—were expressions of panic.” 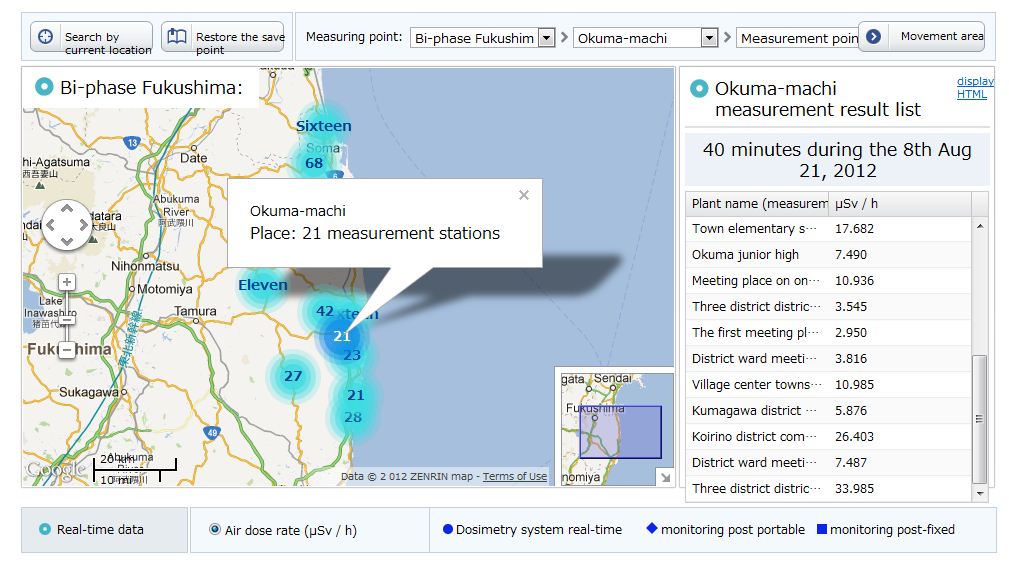 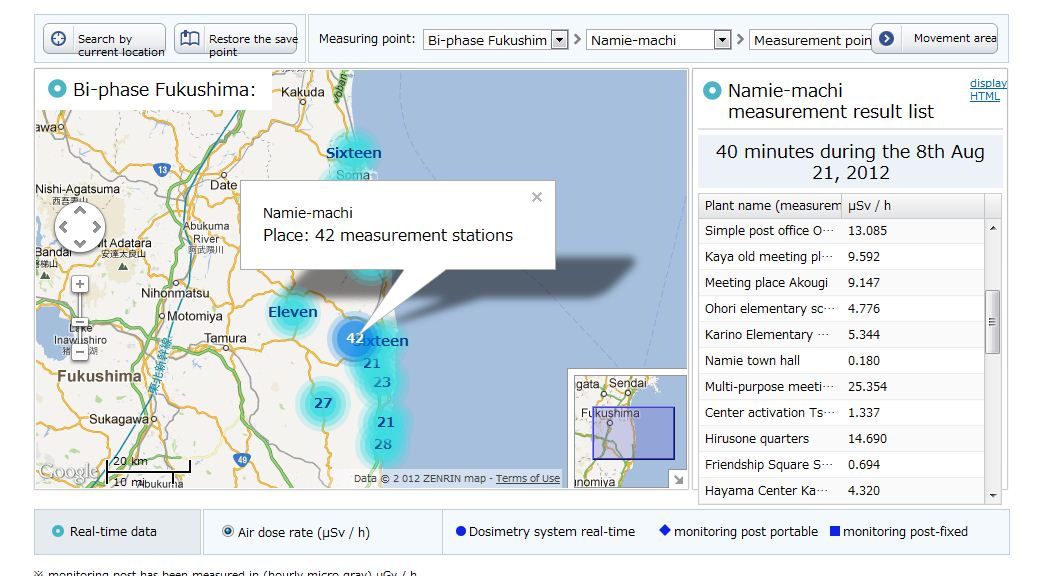 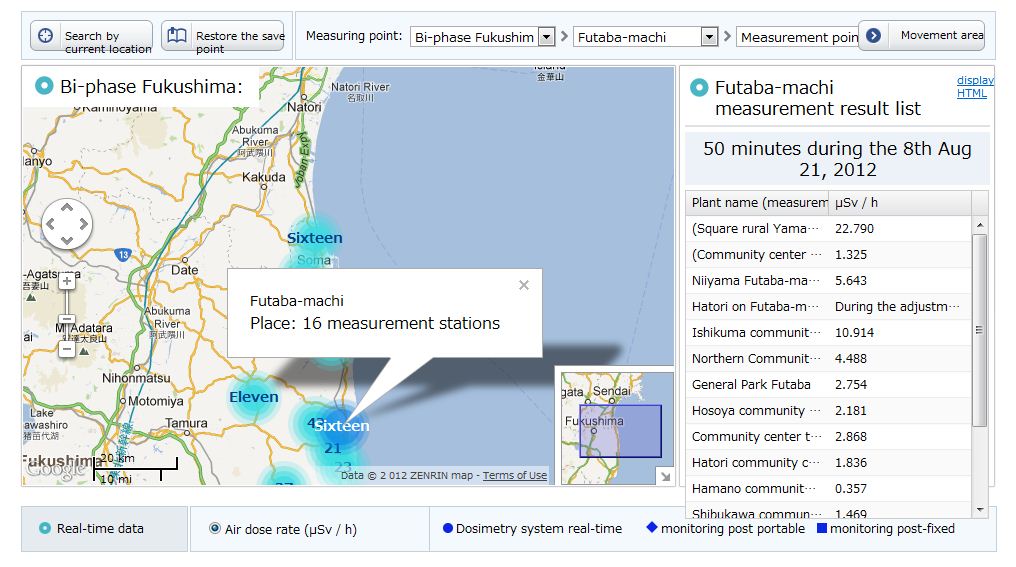 “In the Fukushima accident, nobody got a dose this big; workers were restricted in their hours of exposure to try to make sure that none received a dose greater than 25 rem (although some exceeded this level). At a larger dose—250 to 350 rem—the symptoms become life-threatening. Essential enzymes are damaged, and your chance of dying (if untreated) is 50%.”

It is an odd comparison to claim that because workers at Daiichi were not dropping like flies from life threatening acute radiation exposures, that none have been damaged or face health risks.  One of the very few things that did work at Daiichi was the quake proof building. This sheltered bunker building on site that has its own environmental system enabled the workers to stay at the plant even as levels outside the building rose to very dangerous levels. Many reactors in Japan do not have these buildings that enabled workers to stay on site and fight the disaster.  It is unclear if any US reactor sites have such buildings.

These worker radiation exposures over time, in most cases over a year or less do carry additional health risk. A worker receiving a 50 mSv per year dose does have an increased cancer risk. Their cancer risk is 15,295 for cancer and 8,500 for mortality (death) per 100,000 people over and above other causes of cancer. This estimate is based on BEIR VII and many workers are well over that 50mSv/year level. This does not mean that those civilians receiving ongoing chronic exposure are out of the woods. Internal exposures are known to be more damaging than external exposures. This explains more on LNT models of low level exposure and how much is simply not settled science across a broad spectrum of people.

“In Fukushima, the area exposed to the greatest radiation—a swath of land some 10 miles wide and 35 miles long—had an estimated first-year dose of more than 2 rem. Some locations recorded doses as high as 22 rem (total exposure before evacuation).”

“Even without the accident, the cancer rate is about 20% of the population, or 4,400 cancers.”

“Of the roughly 100,000 survivors of the Hiroshima and Nagasaki blasts, we can estimate that about 20,000 have died or will die from cancer. But in only about 800 of these cases was the cancer caused by the bombs. ”

It is impossible to estimate the number of cancer deaths when work is still being done to accurately pin down people’s total internal & external exposures. It is apparent people were not exposed evenly. The problem of ongoing exposure has not been solved. Many areas still present an environmental external exposure through elevated levels and hot spots. Internal exposure via food is thought to be why some people have had persistent or rising exposure levels rather than lowering ones as most people have had. Contamination has been found to be rising in forests in Fukushima and in river beds. This is still very much a work in progress that can not be honed down to a simple set of numbers.

“The reactor at Fukushima wasn’t designed to withstand a 9.0 earthquake or a 50-foot tsunami. Surrounding land was contaminated, and it will take years to recover. But it is remarkable how small the nuclear damage is compared with that of the earthquake and tsunami.”

“It is remarkable that so much attention has been given to the radioactive release from Fukushima, considering that the direct death and destruction from the tsunami was enormously greater.”

“Looking back more than a year after the event, it is clear that the Fukushima reactor complex, though nowhere close to state-of-the-art, was adequately designed to contain radiation.”

“New reactors can be made even safer, of course, but the bottom line is that Fukushima passed the test.“

“The great tragedy of the Fukushima accident is that Japan shut down all its nuclear reactors. Even though officials have now turned two back on, the hardships and economic disruptions induced by this policy will be enormous and will dwarf any danger from the reactors themselves“

These kinds of articles that cherry pick data present it in a purposely confusing manner and rarely if ever cite any sources are a problem. It isn’t just the messenger of the information, it is the highly deceptive nature of these articles. They confuse at best and completely misrepresent at worst. Much has been made about Richard Muller, the author of the article. The article itself is factually inaccurate and deceptive in the way it is written no matter who the author was. Muller’s reputation made it even more suspect as his track record has not been clean. Muller, a long time climate change denier funded by the Koch brothers made a public about face on climate change recently. While some applauded it as honesty from a scientist, it may have been more of a tactical maneuver. It is easier to promote nuclear power if you can use climate change as an excuse for using more nuclear power. With Muller’s track record of science positions convenient to those funding his work, his new love of nuclear power is equally suspect. Muller has been heavily promoting a new book on energy and tries to have it both ways with nuclear in this recent interview. Since Muller does have a private consulting business he fails to mention to the media where he gives scientific opinions for pay, shilling for the nuclear industry isn’t a real big leap.