(Read as a PDF here)

Two independent core spray loops (core spray and feed water spray) are installed in the vessel above the upper core grid (top guide) and within the core shroud. The loops are connected to the Core Spray System which is used for core cooling under loss of coolant accident conditions.

The feedwater spargers are mounted to the reactor vessel wall in- the upper part of the downcomer or annulus region. The spargers, each supplied by one of -the two feedwater nozzles, complete a half, circle of the vessel interior and discharges water radially inward. A number of 1-inch holes in each sparger permits the cooler feed water to mix with downcomer recirculation flow before coming in contact with the vessel.

Two sets of parallel isolation valves, one set inside and the other outside the drywell

A core spray filling system maintains the Core Spray System at full capacity to preclude any danger of water hammer when the system goes in operation. The discharge from each of the main pumps flows through a check valve to a common header that supplies water to the booster pumps and a bypass line around the booster pumps. The booster pumps discharge piping contains motor operated isolation valves outside the drywell and air operated testable check valves inside the drywell. Flow from each loop is directed from the pumps through two parallel normally closed motor operated valves, a single line at the containment penetration, two parallel check valves, one locked open manually operated valve and then into the sparger.

Both Core Spray systems and their diesel generators will automatically start upon the detection of one high drywell pressure, or one low reactor vessel water level condition. These conditions generally indicate a pipe break. The system can also be manually initiated by the control room operators.

This system provides high pressure emergency core cooling for small, intermediate, and large line breaks. It is a single loop system and consists of: 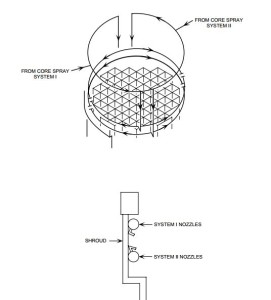 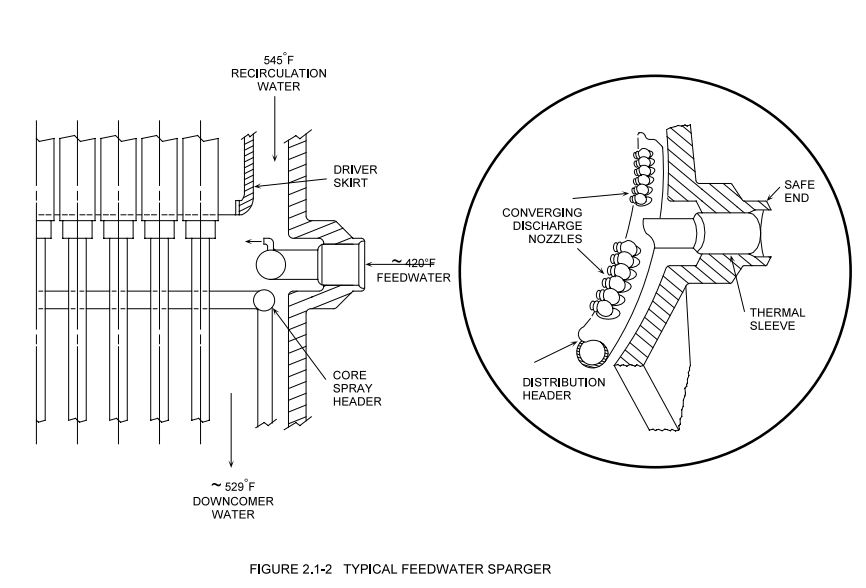 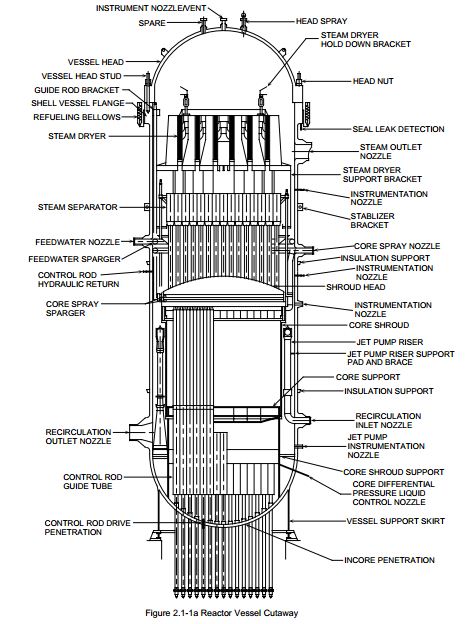 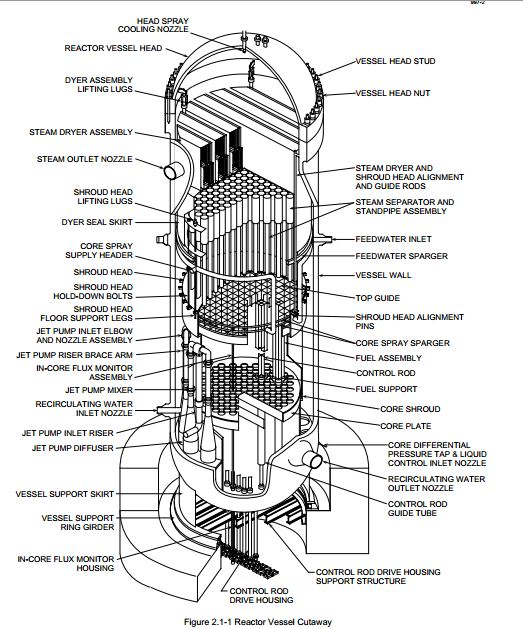 The feedwater inlet nozzle on some boiling water reactor (BWR) vessels contains a stainless steel cladding over its carbon steel base material, the combined total being approximately 6″ (15 cm) thick. Significant thermal stresses on the inner radius of such nozzles have in some cases caused in-service thermal fatigue cracking of the cladding, having the potential to propagate into the base material.

This problem was first defined in 1975 by the US Nuclear Regulatory Commission (NRC) and associated BWR suppliers. Two remedies were proposed, one being the removal of the cladding and the other being a modification to the feedwater nozzle sparger or both. At this time, cracks were identified at a given BWR plant using penetrant and ultrasonic testing (PT & UT) and removed. Grind outs to remove the cracks resulted in divots in the cladding.

Mock up of the BWR reactor vessel penetration nozzle for the feed lines to the spray systems.

As newer systems are developed for testing for these stress related cracks more refined data can reveal not only existing, but also potential crack formation. These nozzles are assumed to undergo the normal stresses for reactor operation and not the extreme temperature and stress conditions that existed at the Fukushima reactors during the course of the accidents. Potential piping degrading is likely to happen not only on the feed water but also the internal spray lines for each core spray system.

These spray lines were counted on by TEPCO at the Fukushima reactors to deliver water critical to ensuring the reactor  pressure vessel (RPV) and fuel remained cooled. TEPCO made connections to the feed water lines which ultimately would reach the feedwater and core spray spargers and onto the loop nozzles. There has been no confirmation that these feedwater lines were still intact outside or inside the reactor vessel or in containment. Accident analyses for severe accidents often treat the normal components in the BWR reactor such as the steam separator and dryer as general core material.

The analyses for severe accidents including meltdown and fuel dry out conditions assume the fuel melt temperature levels increase to a point where these excessive temperatures heat the core material to extreme levels which can act to deform or melt. The conditions at the Fukushima reactor units 1-3 resulted in this very melt condition and as a result have likely deformed or melted the internal piping and spray loops which have been borne out by leakage further down to the torus room as well as water running out of the MSIV doorway on unit 3.

TEPCO has kept water flowing through both the core spray and feedwater lines since they initially hooked up these temporary systems. They have claimed that the reactor vessel and systems have been kept cool however, there is no known instrumentation other than that of the reactor vessel walls which can be reliably counted on to demonstrate sufficient cooling. TEPCO has used selected temperature instrument readings to claim that units 1-3 are in a cold shutdown mode. Stating this condition is illogical because cold shutdown mode consists of many other factors other than temperature to declare the reactor has entered into the cold shutdown official mode.

“Paper tape recordings were checked on Units 1-3 and they don’t show any flow for either core sprayer. The units are in 50 liters/second. Mind you that what Tepco injects would only be about 1 liter/s and below the resolution of the tape recordings. So if the gauge worked and any water was injected through the core sprays at all, the rate must have been much less than anticipated when the recordings were dimensioned”. (quote from simplyinfo.org member)

“Since the structure temperatures close above the core were high (T=l100 K.. .1700 K) prior to lower head dryout”

http://www.sci.kth.se/polopoly_fs/1.424080!/Menu/general/column-content/attachment/ClaudioTorregrosa_MSs_Thesis.pdf
(Note: the report is talking about the injection systems that were not available at normal capacity at the Fukushima reactors 1-3)

“In the event that any of these injection systems is available and core cooling is not regained, the water level in the vessel is expected to be below the core lower plate but still filling the reactor lower plenum. The uncovered fuel rods and reactor core materials (including reactor internal structures, control rods, instrumentation tubes, etc.) will overheat, melt and drain by gravity to the lower plenum”

http://atomicinsights.com/what-does-a-melted-nuclear-core-look-like/
This link contains video footage of the inside of the TMI-2 reactor for initial inspection as well as preparations and fuel debris removal. The footage shows melting of structural components just above the reactor core as well as other peripheral structural melting during the accident. TMI was able to, in time, restore water to the core thus preventing more significant damage as that incurred at the Fukushima reactor unit 1-3. 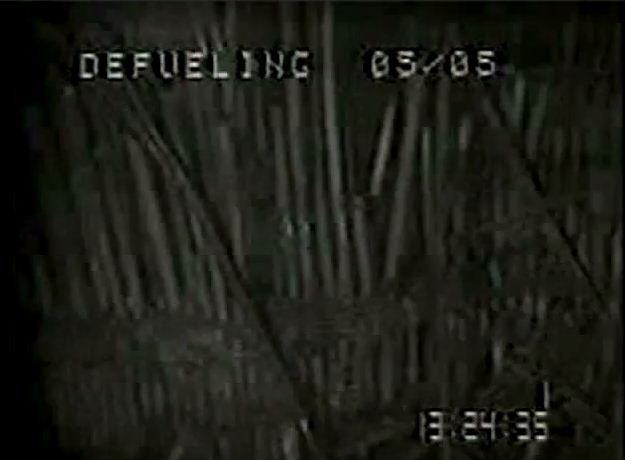 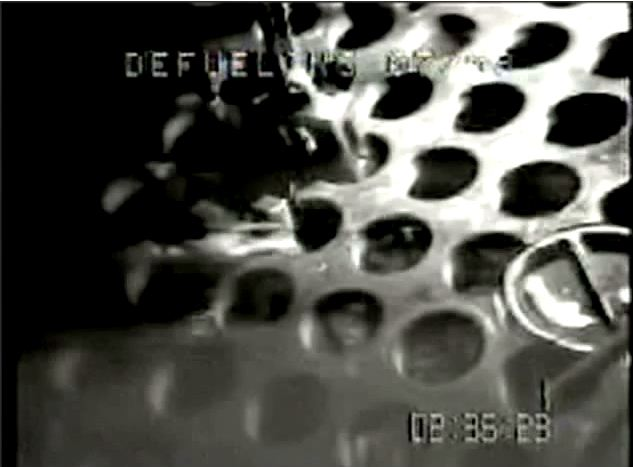 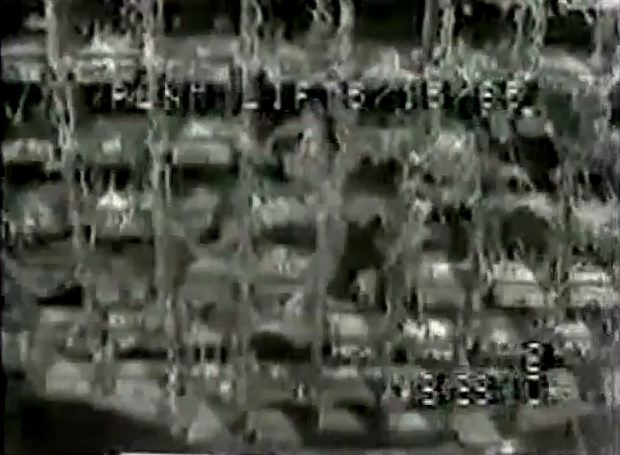 TEPCO, in the haste and crisis reactions knew they needed to get some sort of water fed into the reactor vessels of Units 1-3. In their desperation they set up portable and temporary systems as they chose locations to tie into the reactor core spray and feedwater systems. This decision, with no knowledge of the statues of the systems within the reactor building including the reactor vessel was the best they thought could be done at the time. Since these temporary hookups were made there have been varying claims, although not proven, that the water is somehow keeping the core and melted fuel cooled.