This paper is also available as a PDF

The BWR reactor vessel bottom support skirt has had numerous analyses performed to determine the effects from thermal stress/pressure cycling, fatigue failure and lifetime limitations resulting from neutron bombardment. Each of these areas has been determined to be of no major concern due to the location of the skirt area and the distance of the skirt from the high neutron area of the core.

Below are some general statistics on the skirt area which is located at the bottom of the BWR reactor vessel. Data from the Browns Ferry reactor are used as a comparison to those BWR plants at Fukushima. 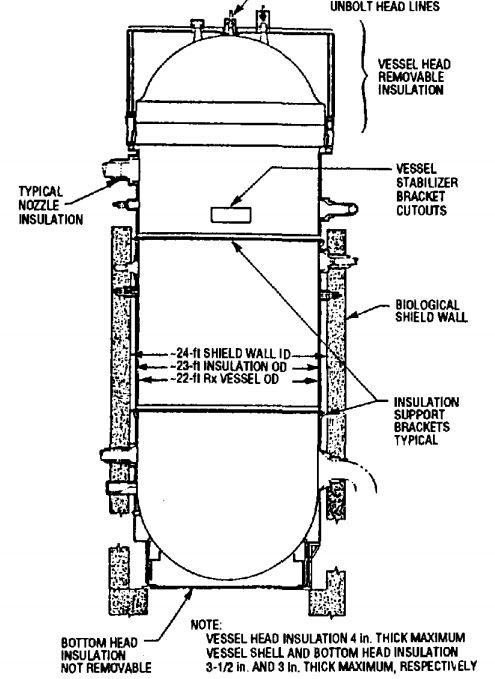 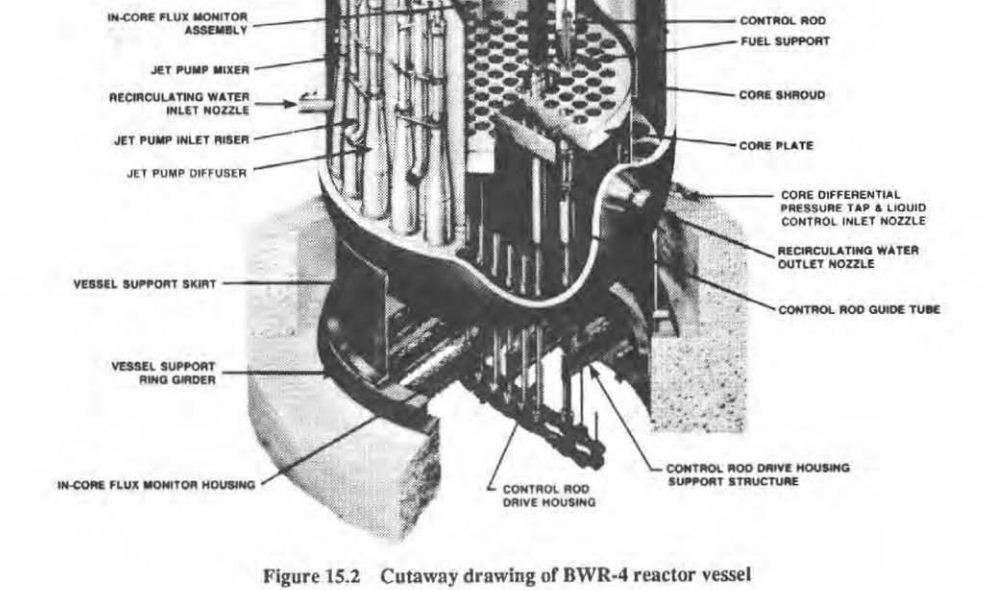 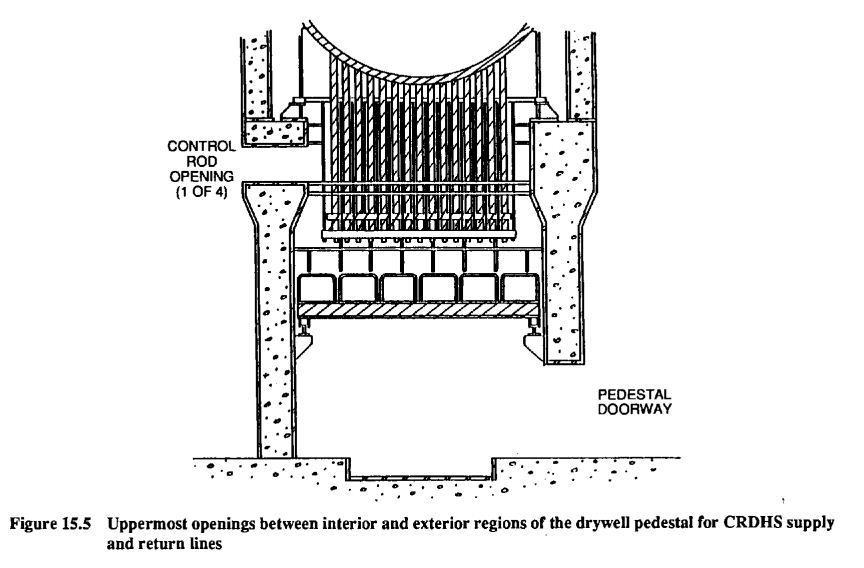 NOTE: This volume would be larger if one would count the space from the cut out openings in the vertical wall of the pedestal, ref Fig 15.5,  which would increase the  gas volume area and accommodate more hydrogen gas 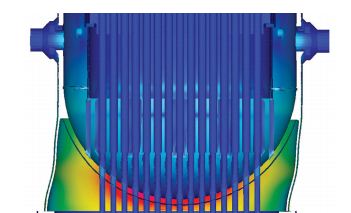 The graphic above is a thermal image of the relative volume of the area inside the support flange and demonstrates sufficient area for Hydrogen gas accumulation with no escape/vent route.

SUPPORT SKIRT NOT AN AREA OF CONCERN FOR STRESS, FATIGUE OR FLUENCE

Multiple historical analyses have been performed on the support skirt area. As a result of all the analyses, this area has been assumed to be of no significant safety concern. Three main areas of evaluation were stress corrosion cracking, support skirt fatigue and neutron exposure induced damage.

Support skirt fatigue is evaluated in accordance with ASME Code Section III requirements. Usage factors vary widely for each plant, depending on methods and details of fatigue analysis. Fatigue usage in the support skirt is primarily caused by startup/shutdown, (heat-up/cool-down) thermal events. Based on an assessment using a realistic stress cycle loading, fatigue is not a significant degradation mechanism for the support skirt.

The effect of low-energy neutron exposure on the reactor support skirt:

This assessment took into account the effects on the high flux isotope reactor (HFIR). Using the most conservative interpretation of HFIR data and 80 year fluence levels it was concluded that because of distance from the reactor core, thermal neutron radiation induced embrittlement is not significant for BWR vessel support skirts.

Hammersley et al. (1993) have performed experiments for a BWR reactor vessel with support skirts and have shown that this can preclude water from contacting the RPV lower head.

The results of this assessment demonstrate that the existence of a trapped gas pocket beneath the vessel skirt attachment would ultimately prove fatal to the integrity of the bottom head wall. The most important attribute of drywell flooding is that of preventing early failure of the instrument guide tube penetration assemblies, would be realized. The effectiveness of drywell flooding could be improved if the reactor vessel support skirt were vented in order to reduce the trapped gas volume and increase the fraction of bottom head surface area contacted by water.

Partial venting of the support skirt could be achieved by loosening the cover on the support skirt manhole access cover. This would increase the covered portion of the bottom head from 55% to 73% of the total outer surface area, which delays the predicted time of bottom head creep rupture by about one hour. 100% water coverage of the vessel bottom head would convert the failure mechanism from bottom head creep rupture to melting of the upper vessel wall and would delay the predicted time of failure to more than 20 hours after scram. 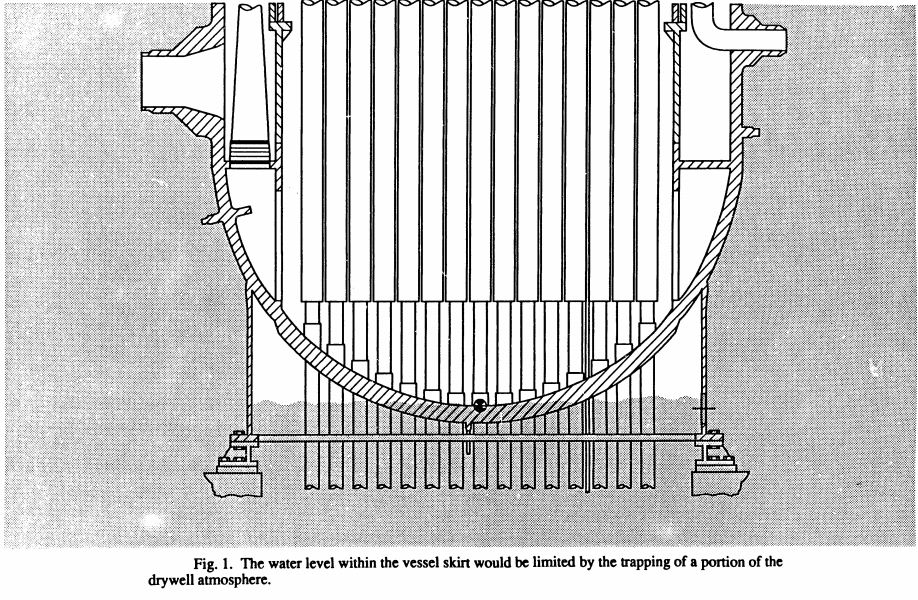 Complete venting of the reactor vessel support skirt would provide 100% water coverage of the vessel bottom head but would require special measures such as the drilling of small holes at the upper end of the skirt, just below the attachment weld. Nevertheless, it seems beyond question that all portions of the reactor vessel pressure boundary (including the instrument guide tubes) that are contacted by water on their outer surfaces would survive any challenge imposed by a lower plenum debris bed or its relocated liquids.

There is a problem, however, in that most of the upper portion of the reactor vessel could not be covered by water and, more significant in the short term, much of the outer surface of the vessel bottom head would be dry as well. The reactor vessel bottom head would be dry due to the gas pocket that would be trapped within the vessel support skirt during the process of raising the water level within the drywell.

NOTE: Although the effect of gas trapping within the vessel skirt is such that implementation of the drywell flooding strategy for existing plants could only delay failure of the bottom head, the current analyses demonstrate the potential for preventing vessel failure entirely in future plants. It is recommended that consideration be given to providing means for complete coverage of the bottom head and submergence of most or all of the upper vessel wall as a severe accident mitigation strategy for future plant designs.

The vessel support skirt flange area has a gas volume of 853 ft3 (24.154 m3). There is no way to accurately measure the hydrogen concentration levels within that area. During the initial stages of the fuel melt within the reactor vessel, high levels of hydrogen were generated as a result of the fuel cladding reaching elevated temperatures that resulted in burning and melting. These hydrogen levels elevated as more of the core melted and began settling to the bottom of the reactor vessel.

When the melted corium began to impinge on the bottom head of the reactor vessel, initial breaching is estimated to have occurred in the instrument and control rode guide tubes which allowed the melted fuel to access the support skirt area. During this time period hydrogen gases could likely have begun to accumulate within the support skirt area that could have resulted in reaching explosive concentrations 6-75% as discussed below.

The prospects for ignition of a mixture of combustible gases and oxygen depend on the concentration of the reactants and the presence of an ignition source. Experimental data on the limits for combustion (deflagration) have been summarized in the well known Shapiro diagram. This indicates that for a dry atmosphere, combustion is possible for hydrogen volume fractions between 6 and 75%.  The likelihood of the presence of an ignition source depends on the accident sequence.

Due to various stochastic processes  Ignition may occur anywhere in the containment at any time when there is a combustible mixture.

In conclusion, we cannot rule out likely explosions within the support skirt conical ring area at the early/subsequent stages of the core melt accidents. A hydrogen explosion in this area of the building could have caused severe damage to the structural integrity of the support skirt area, the bolted flange or to the pedestal area which is the main support for the reactor vessel. Extreme damage could include a settling of the reactor vessel due to the extreme weight and mass of the vessel and it’s contents.

It is our position that the NRC should re-study the current status of the BWR vessel support skirt area for severe accidents with the intent of issuing a generic letter suggesting analysis to support installation of vent holes/removal of the skirt man way access cover during reactor operations.