Questions arose this week about what camera was being used to do the scope project at unit 2 at Fukushima Daiichi.
Initial information we received in November 2011 indicated a Swedish made radiation resistant camera was to be used. Additional information provided by the company shows that they are not the manufacturer of the scope camera but instead are providing radiation resistant general cameras for monitoring onsite.

UPDATE: Fukushima Daiichi worker “Happy20790” said in a series of tweets that the camera they used was radiation resistant. Now he wonders how high the radiation inside the reactor is.

EX-SKF found an NHK broadcast that referred to an Olympus camera
If the camera used at unit 2 is indeed the model shown in the NHK news piece it is this Olympus scope camera
If the Iplex FX camera was indeed used it is not a radiation resistant camera.

Below are some illustrations that help locate the camera scope attempt. It was done through a penetration on the 1st floor. The Garage entrance to the building and both containment air locks are also noted on the floor plan. This would be the South-East corner inside the reactor building where the penetration is. The elevation drawing below shows the level of the air lock doors on the 1st floor in red. This is the same level where the workers were inserting the scope. There is a 6 meter (20 foot) difference between the floor of the containment area and about head height on an average person if they were standing in the air lock doorway. TEPCO estimated there was 5 meters of water in containment. That would be roughly about 1-2 foot above the floor grade (waist or shin height) of the containment air lock door. Blue line in the second illustration shows where TEPCO estimated water would be. Dark black line indicates the floor of containment. If the water had been 5 meters above the containment floor the grate/catwalk seen in the scope image would have been under water. The grate is either even with the floor of the containment air lock or down the indicated short set of stairs. 5 meters would have put it under water. 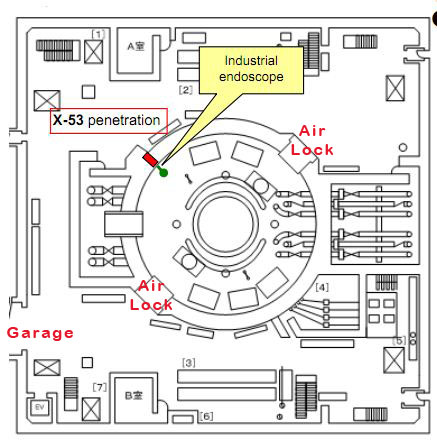 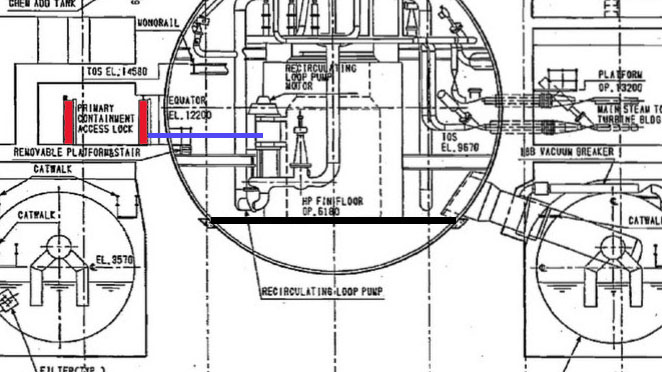