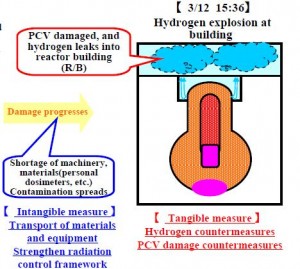 Both JNES and TEPCO have released new reports that confirm some long understood theories of our research group.

Containment Gasket Failures:
TEPCO admits in their recent report that containment cap gaskets likely failed and were possibly the route for hydrogen to escape into the refueling floor. TEPCO assumes the same gasket failure for units 2 and 3.

JNES includes these points on their analysis of this issue:

“Similarly, the leakage due to over-temperature was considered at the top-head flange of the containment (PCV).”

JNES also considers that the top containment flange gasket (the containment cap gasket) would have failed at 620k (346.85c) they also think the machine hatch failed at that temperature. 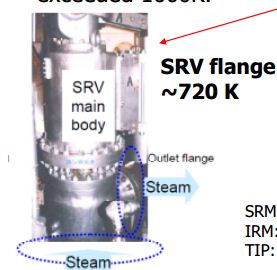 Other Gasket Failures:
JNES considers the safety relief valve flanges to be a failure point. They think the flange gasket failed as 720k. The safety relief valves exist in multiples to blow steam down to the torus. The in core probes that are part of the TIPS system is cited as having a failure point of 1000k. Pipe and cable penetration holes, the personnel hatch, torus manhole covers and the reactor cap gasket are also cited as potential failure points. Most gasket materials have failure or melting temperatures that are lower than the high temperatures seen in a meltdown scenario. 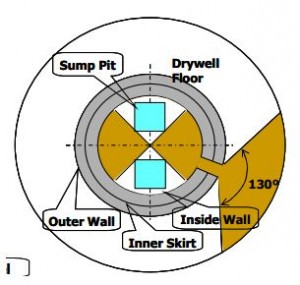 Corium Outflow:
JNES assumes at unit 1 corium (melted fuel) flowed out of the pedestal under the reactor vessel. Then the corium traveled out the pedestal across the drywell floor in a 130 degree fan. JNES shows this reaching the edge of the drywell floor. The smallish sump pits in the pedestal would have retained some of the corium causing larger holes to be burned in those locations that they do not think burned all the way through the containment basemat. They do not elaborate on where they think the corium went after it flowed out onto the drywell floor. Scope work by TEPCO did not find corium masses on the drywell floor at units 1 or 2. TEPCO cites in a recent document they are considering the idea that fuel fragments may be in the suppression chamber but JNES does not go far enough in their analysis to make this connection.

RCIC & HPCI shutdown:
JNES’s attempts to reproduce TEPCO’s records of the HPCi, RCIC and pressure readings at unit 3 proved difficult. Their modeling could not reproduce what the sensors recorded at #3 leaving many questions about what really went on inside unit 3. Both JNES and TEPCO cite a rapid drop in RPV pressure when the HPCI system was started up due to the HPCI being able to handle larger amounts of steam. TEPCO says the RCIC unit worked initially and was automatically shut down right before the tsunami arrived, it was restarted manually after the tsunami. The RCIC automatically shut down on March 12, then the HPCI automatically started and was manually shut off on March 13. TEPCO says this was done to switch to the fire line for water injection but according to TEPCO’s record there was 7 hours between the HPCI being manually shut off and water injection through the fire line beginning. TEPCO claims there were issues trying to vent the reactor to lower the pressure. The lower pressure was required to be able to inject water by the fire line. The water injection began in the late morning on March 13th, at 11am March 14th unit 3 exploded. When the RCIC automatically stopped, neither TEPCO or JNES are clear about why it stopped but the RCIC is dependent on having cool water in the torus (suppression chamber) to properly function. The JNES presentation does show an analysis of thermal stratification in the torus (suppression chamber) after 20 hours of operation. The temperature stratification shows much of the torus water would be at or above the boiling point of 100c. 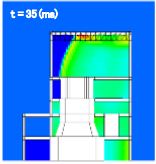 Hydrogen explosions:
Both JNES and TEPCO now cite the containment cap gaskets as the cause of hydrogen to flow into the refueling floor. JNES also assumes 1000kg of hydrogen leaked into the first floor of unit 3. The JNES model shows concentrations of hydrogen in a lower level closest to the outer wall and also in an asymmetrical fashion on the refueling floor. JNES assumes the device hatch to be the leakage point. TEPCO found the large concrete plug for this hatch to have been dislodged. They also later found highly radioactive water leaking out of that hatch.