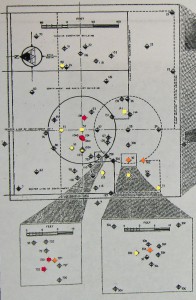 Two reports were done back in the 1960’s by a New York City engineering firm, Dames & Moore. The work looked at the geology of the proposed nuclear site and the appropriateness of the plant design to the chosen site.

The 1967 study looked mostly at what they considered “environmental” issues but focused on soil and land properties at that point Dames & Moore felt the site to be without considerable flaws. In the 1968 report they took a considerably different opinion.

The foundation related geologic inspection work found what appears to be part of a long horizontally running vein of vertical cavities and voids in the bedrock. While Dames & Moore was not able to conclusively prove the interconnectedness of the found flaws they did find matching evidence in a nearby quarry that makes them think the findings at the plant site are part of a larger formation.

What caused the review of these older documents was a mention in a recent HDR geologic testing report that referred to karst formations under the plant. HDR included a drawing they attribute to Dames & Moore that shows a considerable flaw directly under containment. It is described as “infill of decomposed limestone” but there is no description of the nature of this feature. While this drawing is noted as not being to scale it raised concerns there could be geologic issues beneath the reactor building itself. This Dames & Moore drawing is not included in either the 1967 or 1968 reports. We would like to thank Clean Nebraska for providing copies of these reports for review. The geologic findings of the Dames & Moore reports is at the end of this review for those who don’t want to read the entire document. 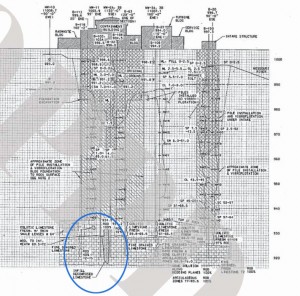 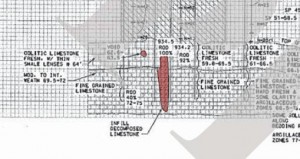 Close up of the bedrock feature highlighted in red. Karst formations are known to exist in the area with one noted by USGS as being nearby. 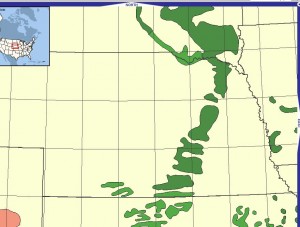 While a major karst formation is not noted at the Ft. Calhoun site, the limestone bedrock in the area is prone to this kind of erosion and flaws.

Voids are areas where there is a distinct gap and do not contain rock, gravel, sand etc.

Cavities are voids where they are filled with some sort of rock, sand, gravel, water or a combination of these.

Joints are running cracks in the bedrock. These can run for long distances and can happen vertical or horizontal across the rock.

These kinds of flaws in the bedrock are of concern because they originally grew through erosion and can continue to grow through erosion over time. HDR claimed the karst flaws under Ft. Calhoun did not need current inspection because they deemed cavities to be filled with water. HDR gives no basis to support their claim. They also urge the owners of Ft. Calhoun to seek further inspection below the main buildings of the plant and the reactor to assure there is no erosion underneath these critical structures. HDR appeared to be concerned about soil erosion around foundation piles but also didn’t dismiss the bedrock erosion risk beneath the reactor.

Placing large high demand buildings such as sky scrapers on karst prone limestone has been a topic of research and concern by engineers and architects worldwide. Malaysia has faced challenges with this and considerable research into how to safely place a foundation on these kinds of bedrock has been done. Avoiding flaws in the rock vs. foundation piles along with assuring the pile sits upon a known piece of horizontally and vertically solid bedrock is critical to building stability and safety.

In the 1968 report OPPD chose to move the site location slightly due to the amount of voids and cavities at the original site. 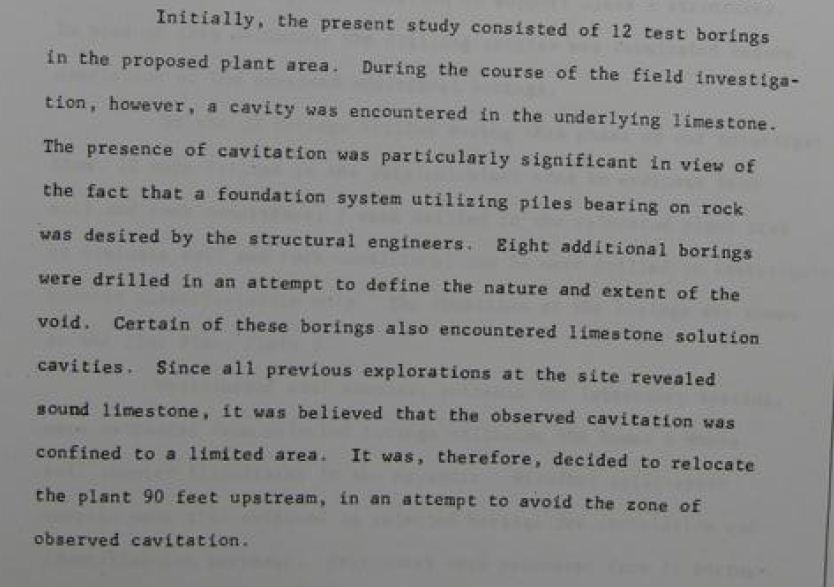 Dames & Moore made a series of suggestions to deal with the flaws in the bedrock at the site. They strongly suggested a geologic engineer be on site through all the foundation work to direct the work. Knowing the extent of the voids, cavities and joints under the plant site they gave instructions to attempt to assure the foundation hit sound bedrock. These included drilling down to a set height. If a void or cavity existed at that ending location they were to continue drilling down up to 15 feet looking for bedrock. Nothing was done to assure there wasn’t a deeper cavity or void below those levels.

HDR lists this scenario in their list of potential threats to the plant, where the foundation pile would punch through the rock to a void below. There was also no process mentioned to deal with lateral gaps around a foundation pile that could be created by voids or cavities. If the foundation pile ran through an area of void or cavity that space would lack the lateral support normally provided by the bedrock or packed soil. Dames & Moore described the process that formed the bedrock flaws under the reactor and the extent of these flaws. They describe how the cavities are formed and how they expand into the upper levels of limestone over time. The mechanism of flowing water underground is still in play on the bedrock. Limestone is softer and more easily eroded than other varieties of rock like granite. 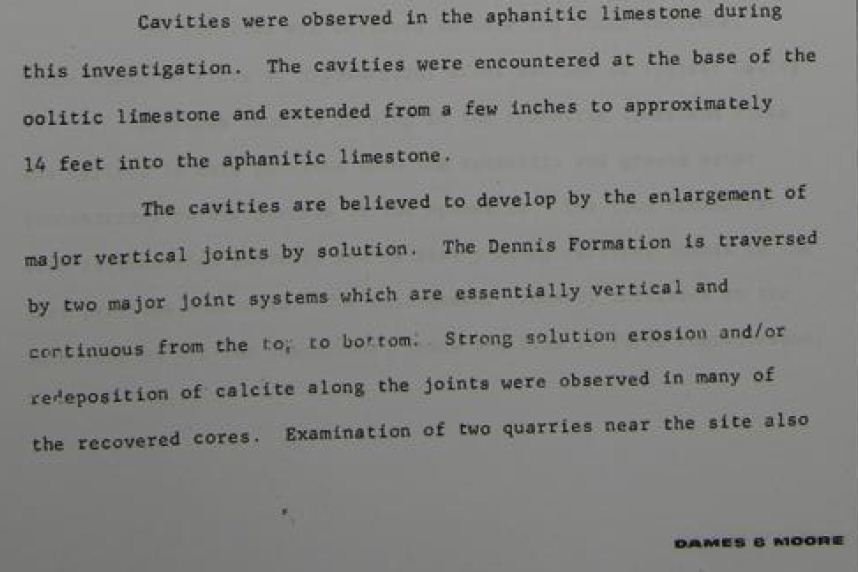 Dames & Moore also mention evidence that some of these flaws have reached up to the soil level as they found upper soils inside some lower cavities.

Dames & Moore made these suggestions specific to dealing with the bedrock problems on site as foundations were installed. They urged pile foundations on class I and class II buildings. Class 1 includes the reactor and auxiliary building. Class II includes structures like the turbine building are mentioned to be on pile or partial pile foundations but multiple instances of evidence that there was shifting in the turbine and machine buildings were found. Cracks that could indicate movement in the auxiliary building were also found. Multiple instances of erosion, soft soil and sinking were found around the perimeter of the class I buildings leading HDR to be concerned for the upper regions of the pile foundations in addition to the bedrock issues. Mention of the need for test boring to understand the bedrock.

Dames & Moore had enough concern about the unpredictability of the rock below containment they suggested a test boring of the rock at each foundation pile.

Dames & Moore instructions on how to properly seat a foundation pile 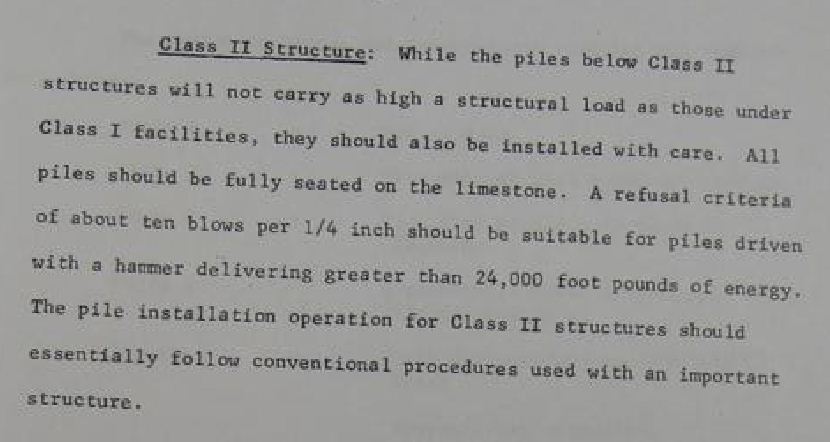 More cautions by Dames & Moore for foundation piles and how to deal with a found cavity.

Dames & Moore suggest changes to the foundation design to try to deal with the problems in the bedrock. 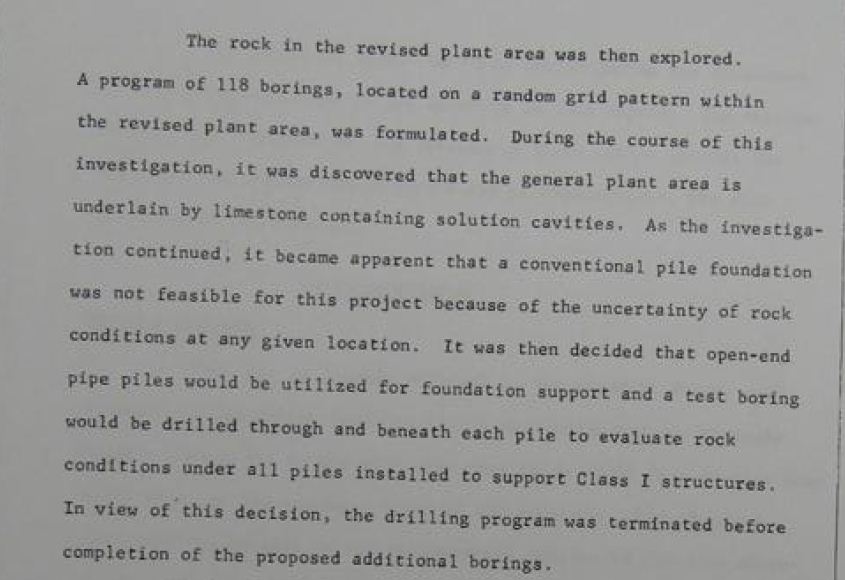 Dames & Moore instruction to do test borings at pile locations to look for cavities and voids. 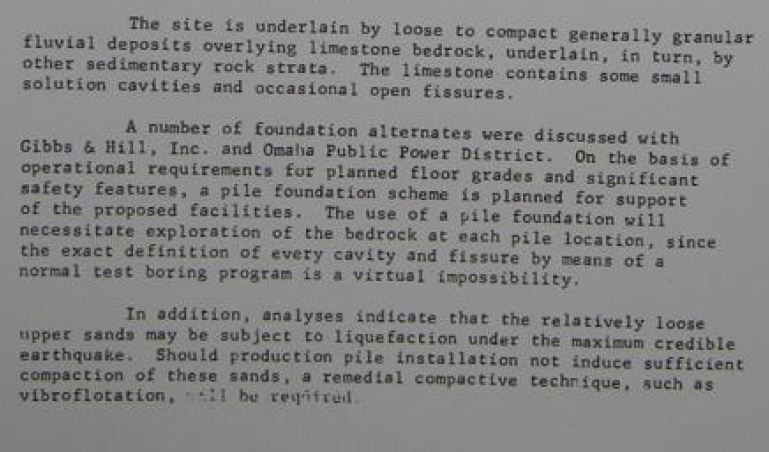 OPPD is in possession of some of the original soil samples. 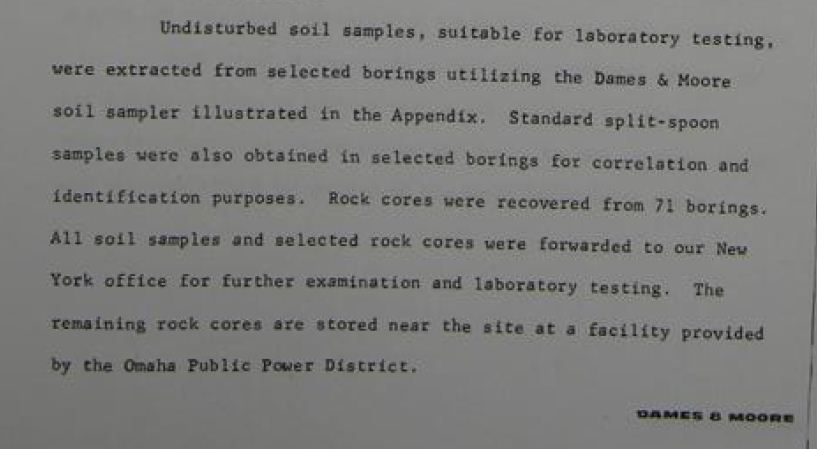 Dames & Moore instruction to have qualified soil engineers on site during the foundation work.

Dames & Moore did a series of bore tests to look for flaws in the bedrock and the soil. After initial testing they moved the containment structure location slightly as can be seen in the illustration of the testing locations. The red marks are places with the most voids or large cavities, orange with moderate cavities or small void areas and yellow includes small cavities and joints. As can be seen in the diagram the focal area of the flaws and intensity of flaws is down the center line of the containment structure. 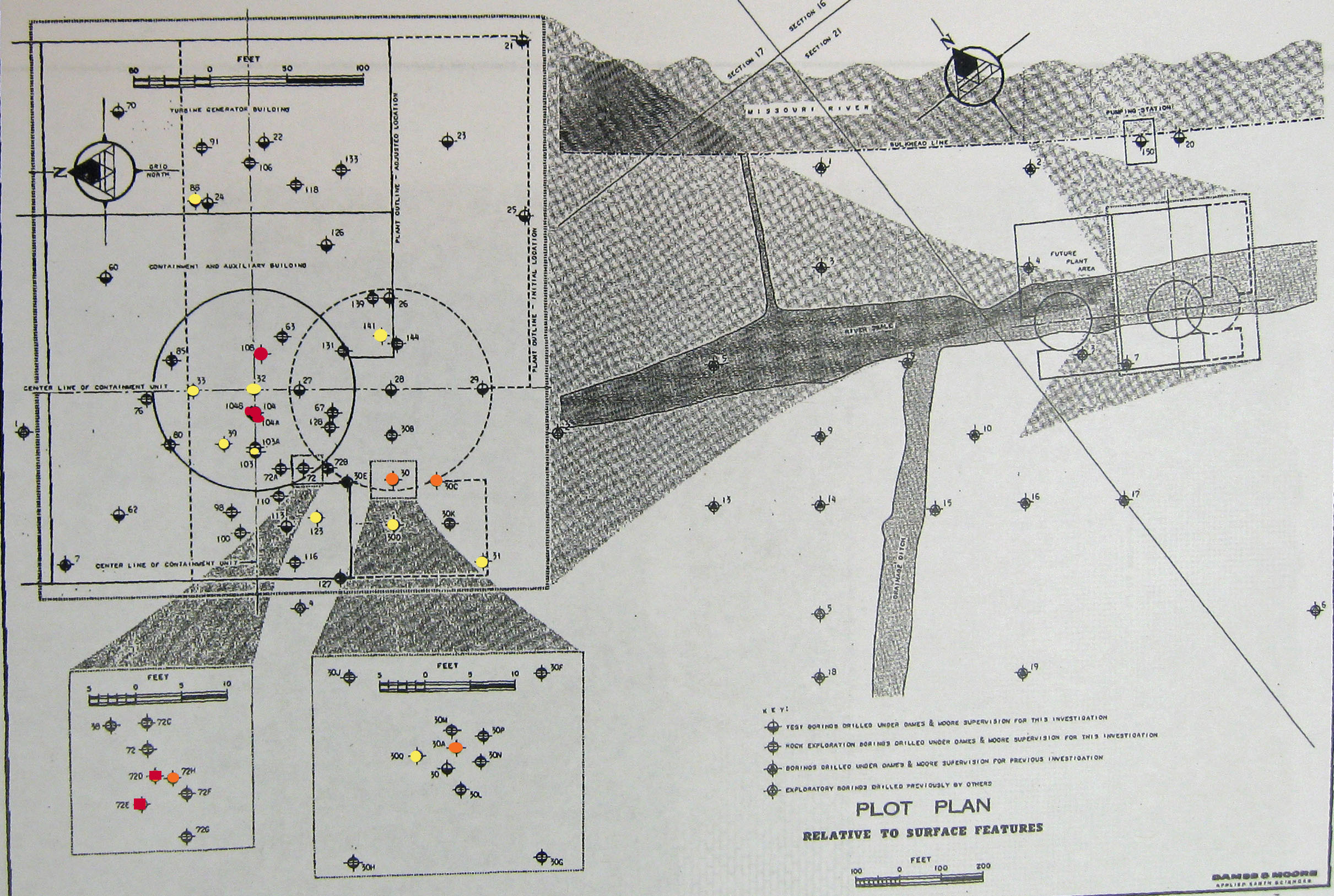 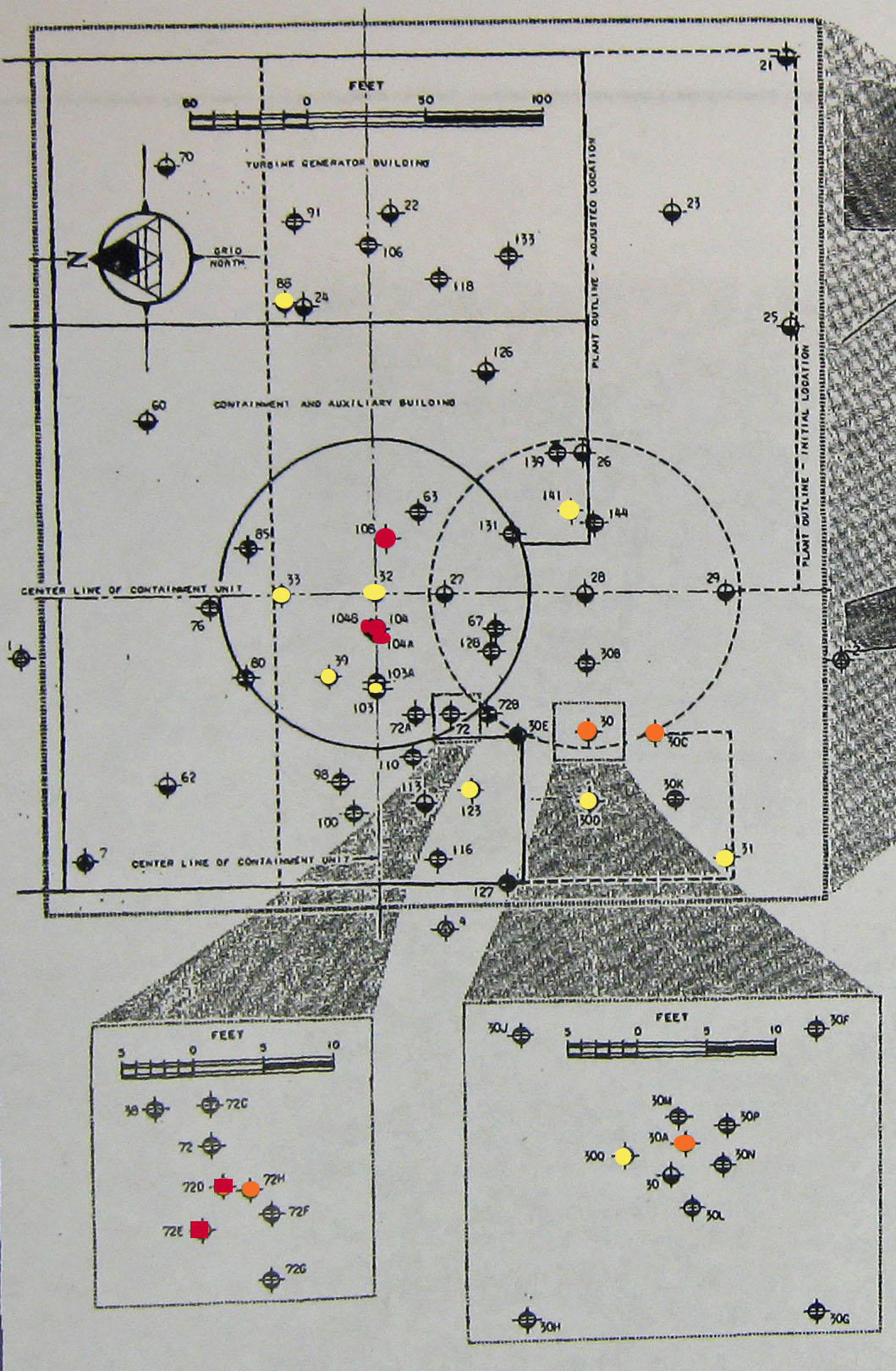 Close up of the containment areas. Please note the two containment locations show the one on the right in dotted lines is a rejected location and the solid line outline is marked as the newer location. The newer location shows more bedrock flaws than the old one. There was no explanation for this in the Dames & Moore reports. The various boring test locations that showed problems under containment are noted in a visual manner below on cross section estimates. More detailed and accurate descriptions of the various voids, cavities and joints can be found in the actual 1968 Dames & Moore report. 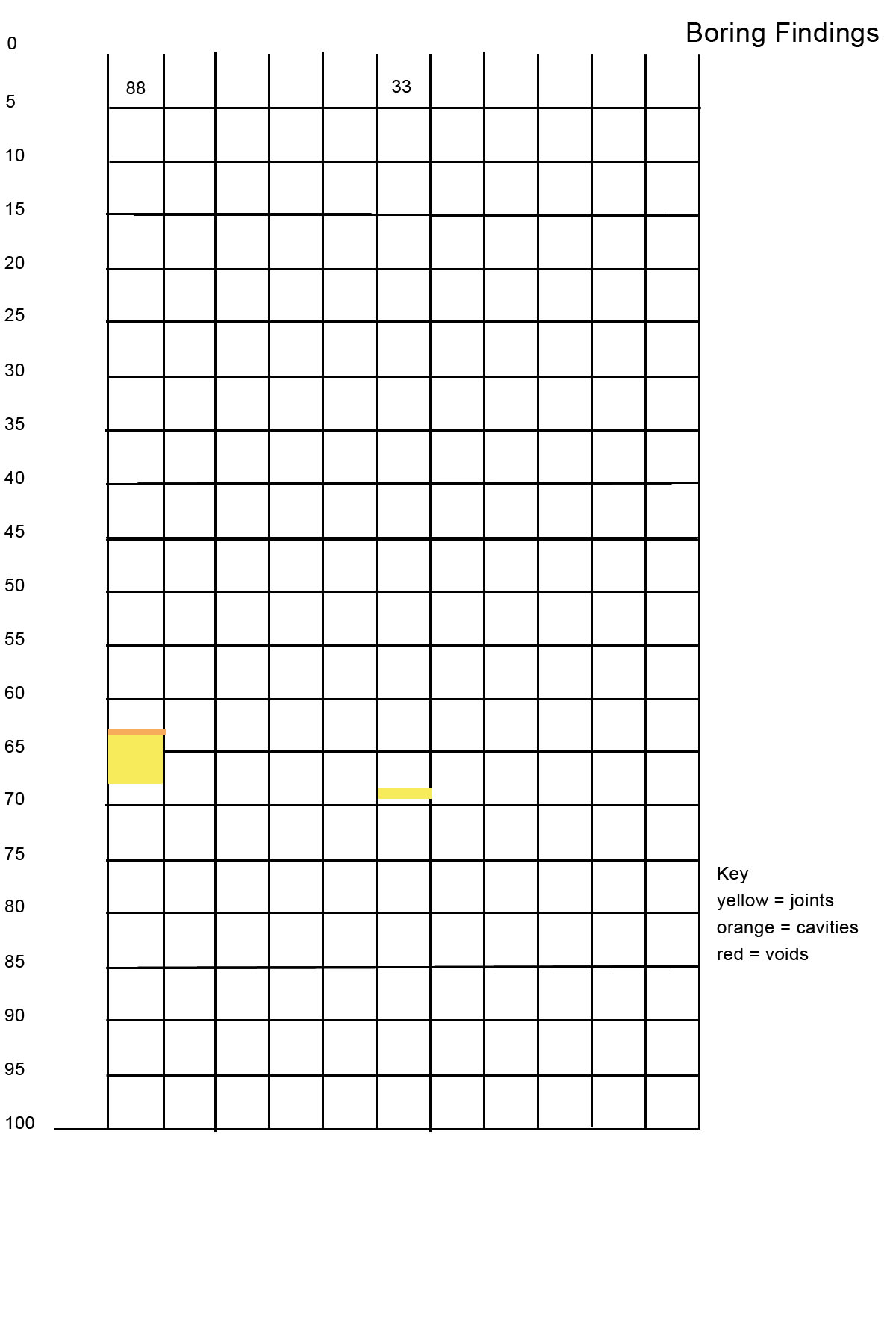 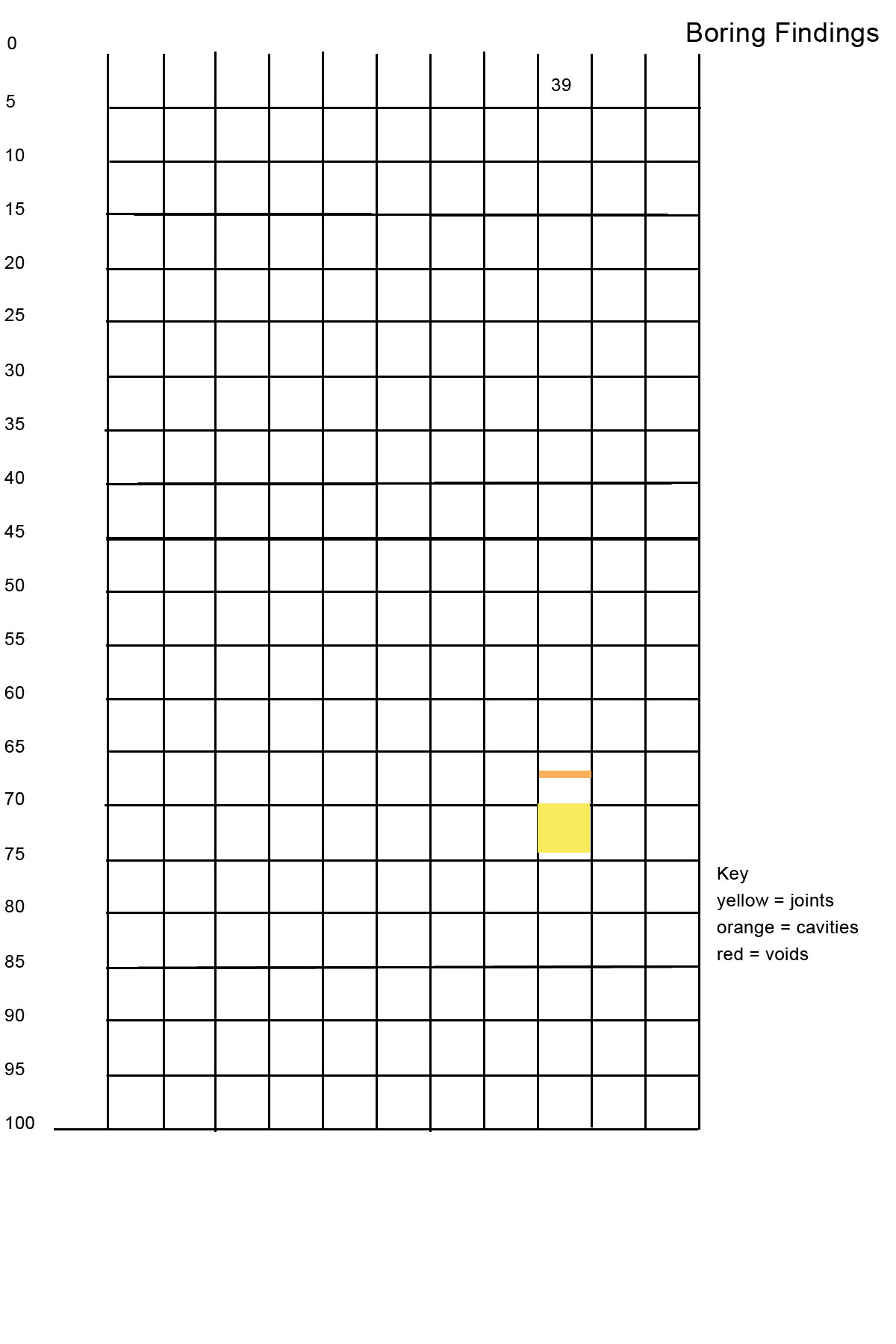 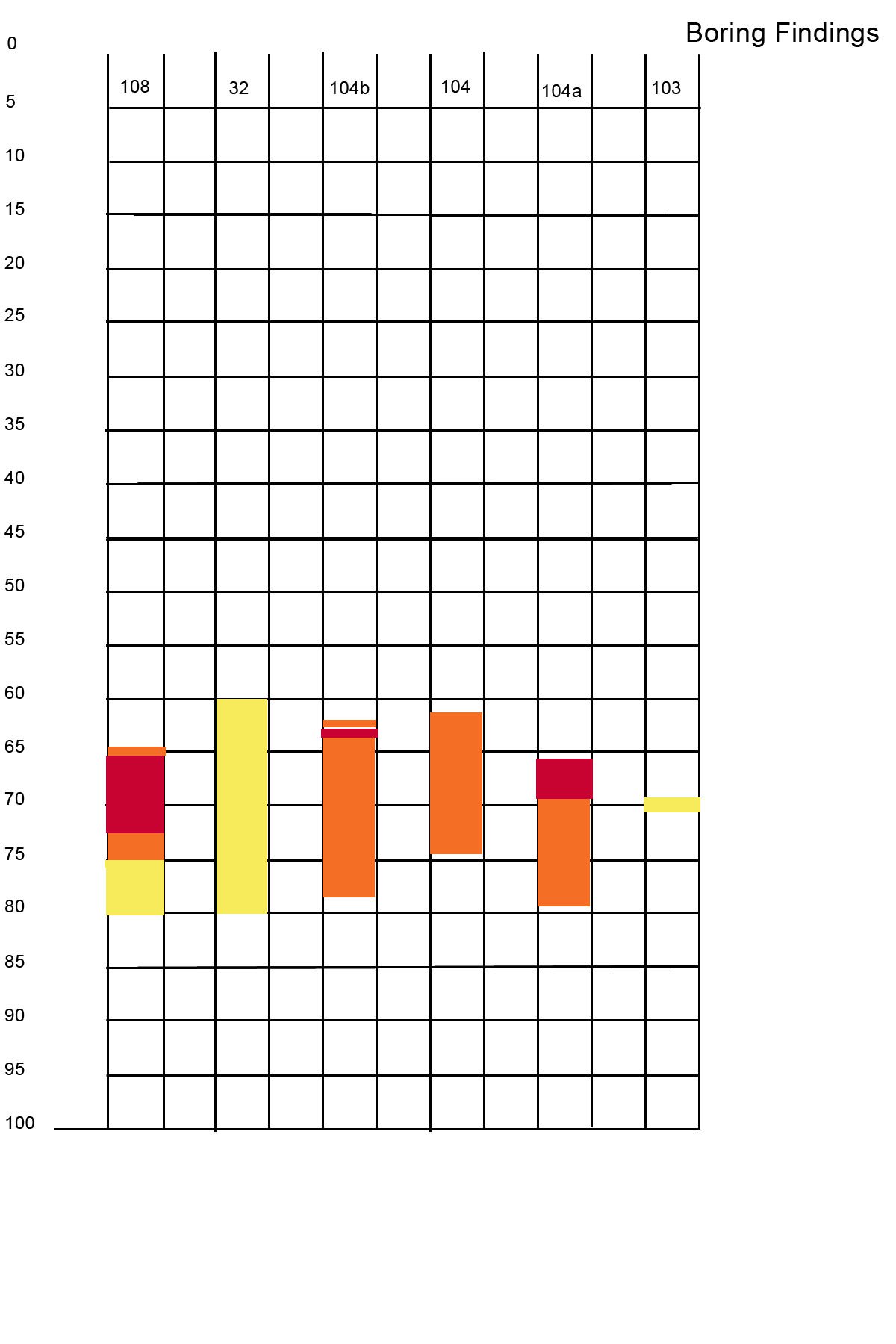 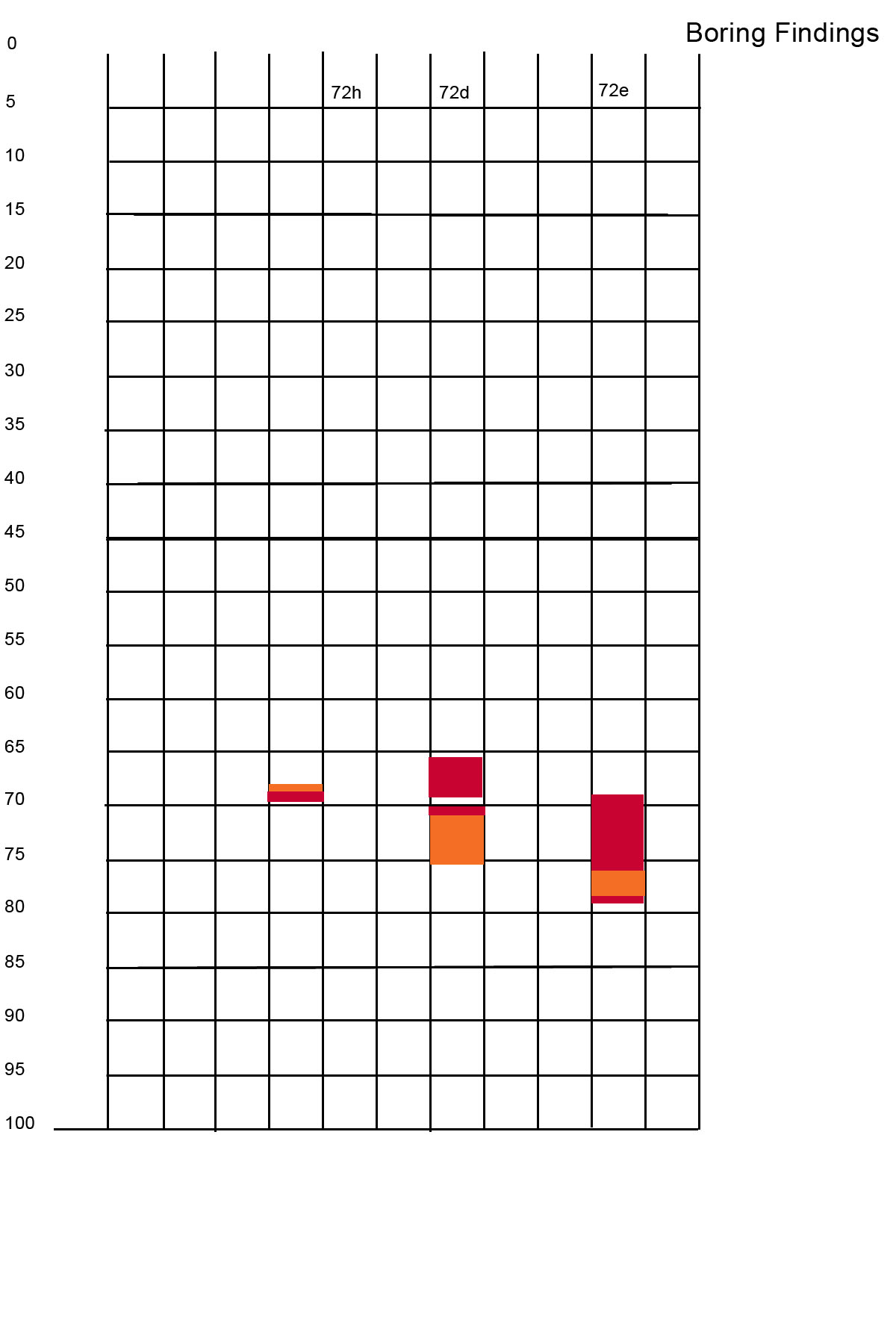 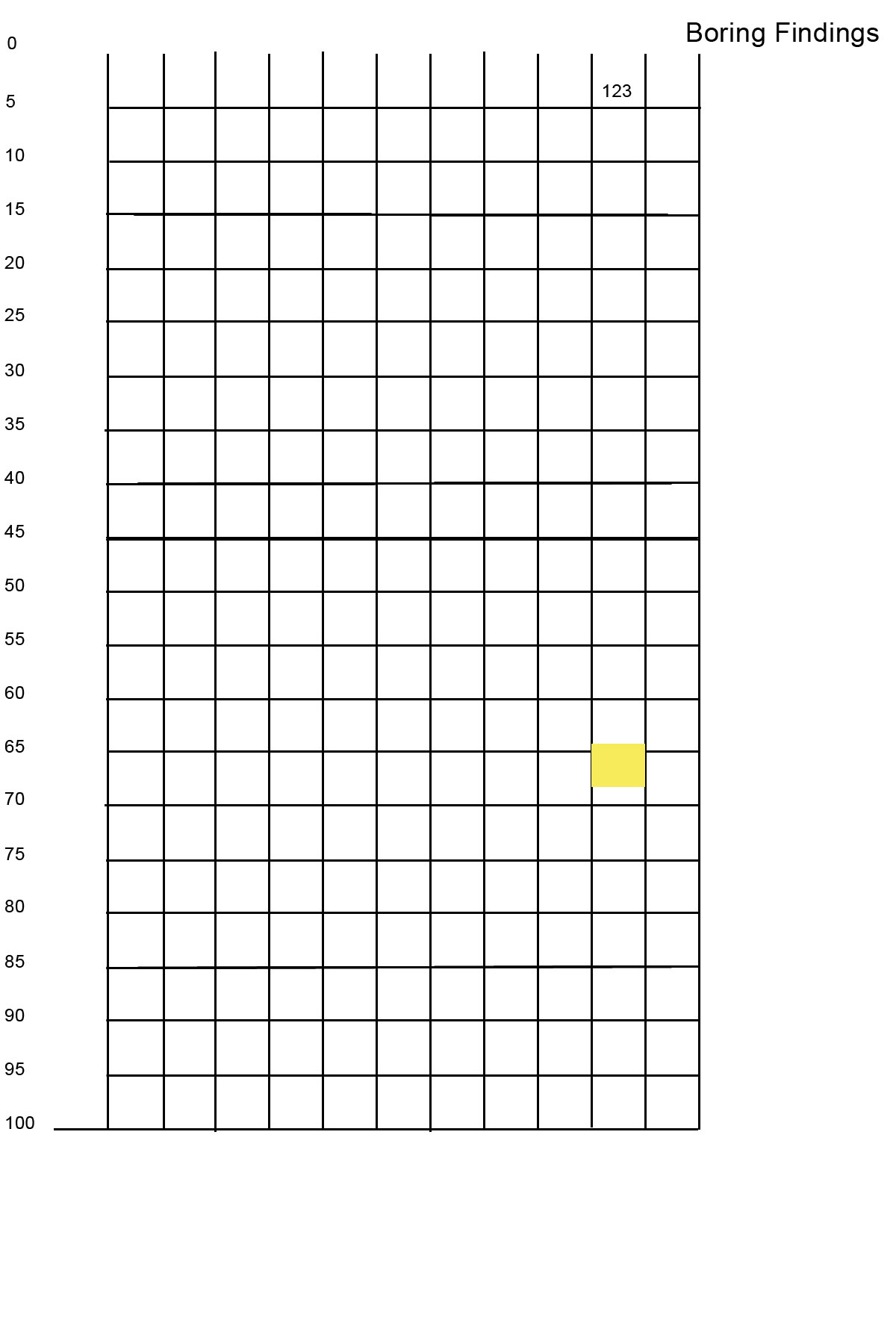 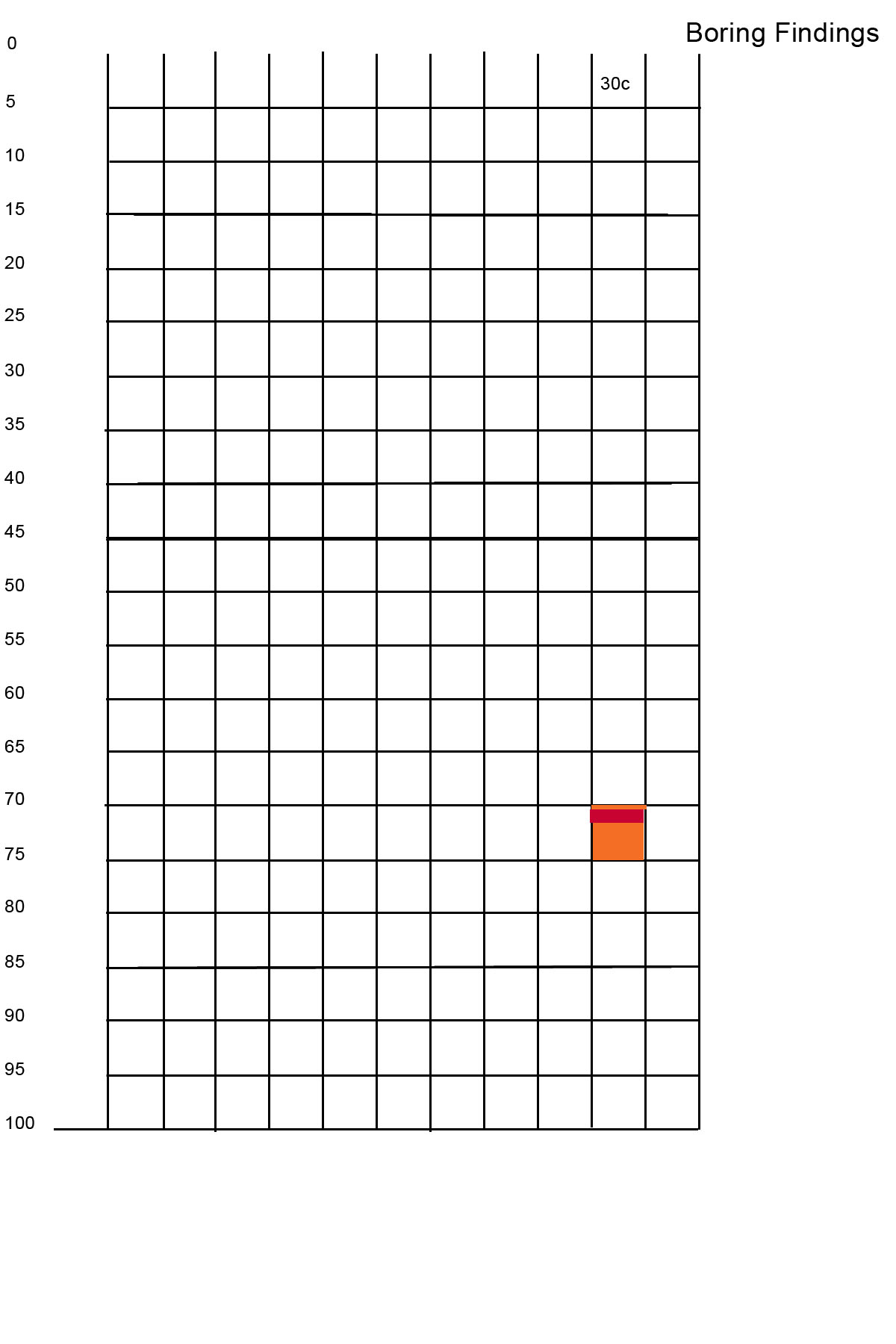 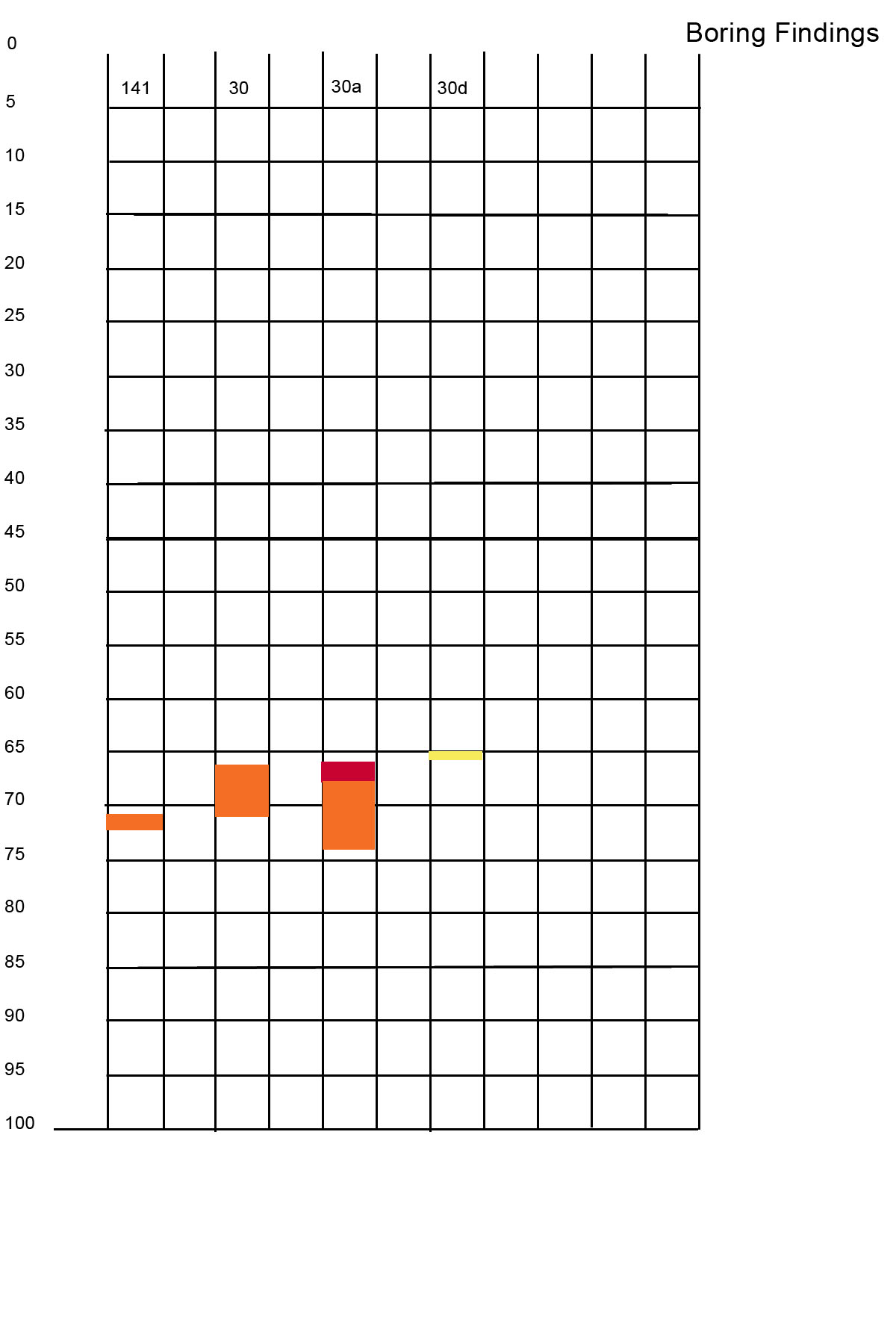 The borings show considerable bedrock flaws down the center line of the containment structure. From what can be found there is no monitoring program to assure the bedrock under the reactor has not changed since the 1960’s. The Dames & Moore reports also did not make it clear what if anything was done to fill in the voids and cavities where foundation piles passed through or into them. Failure to do so would create lateral failure points for the piles.

HDR’s urging for more inspection under critical buildings is important and should be made mandatory by the NRC if it has not already been. This inspection may not go far enough. Further review of the foundation and slab for the containment building should be conducted both to assure it meets the approved design and also to look for potential signs of settling or failure. Ft. Calhoun has been plagued with plant wide problems due to them never doing the design document reconstitution required by the NRC back in the 1990s. Since the design of the containment foundation is so critical to the safety of the reactor it would make sense to focus on assuring that the actual foundation structure matches the licensed design.

The situation of the rock formation flaws beneath containment should have never been permitted for such a high demand structure. What the AEC found permissible in the 1960’s is not always would modern design standards would find to be safe. Further complicating the situation is the unknown of the foundation piles and bedrock directly beneath the reactor and their current condition. The work required to fully assure the foundation meets the design basis and has not experienced rock formation changes below the foundation piles may be impossible or so expensive they would far outweigh any potential future income from this very old small reactor. The unit only produces 475 MW, nearly half the output of most other reactors. Having potential foundation failures beneath an operating nuclear reactor is an unacceptable risk to ask the public to take for a meager possible future income for OPPD.

An Overview of Subsurface Karst Features Associated with Geological Studies in Malaysia
http://www.ejge.com/2009/Ppr09127/Ppr09127.pdf