Some additional information has come out about the accident over the weekend at Arkansas One nuclear plant. Precision Surveillance Corporation of East Chicago IN was the employer of two of the contractors injured and killed on site. The workers had removed a handrail in the travel path of the crane and stator and had cleared the travel path when the crane collapsed.

Five PSC workers that were there to do a “fuel transfer modification” in the containment structure but had been called over to the turbine building to help with work the rail removal. The accident killed Wade Walters and injured Jess Clayton, both employees of PSC.

An unidentified nuclear worker posted this information on a message board:

“ANO U1 entered into their refueling outage week before last. They planned to replace the 690 ton Westinghouse Generator Stator utilizing BiggE Crane and Rigging. The plan was to install jacks on the generator pedestal and lift the stator and casing into a Carriage and move it to the Train Bay. As (readacted) explained, the carriage carrying the stator was to slide over the train bay, perform a 90 degree turn and subsequently be lowered onto the Goldhofer below.

It was when the carriage assembly started its 90 degree turn when the large rails the carriage was moving upon folded up and resulting in load drop. The drop was approximately 32 feet. The rails used are about the same size as the ones used for the SGR (Pronuke- Steam Generator Replacement). The rails straddled both units exciters & generators and had an overall length of about 120 feet or more. The rails were supported from underneath in the Train Bay. Again as (redacted) explained it, the entire assembly was approximately the same size as a SGR rig. As of last night ANO did not have any idea why it happened.”

They also explained more about how the failure caused the power outage:

“Just below the turbine deck adjacent to the Train Bay is both units Non 1E switchgear along with Offsite Power Supply Feeds. The collapse totally destroyed U1 switchgear and resulted in loss of decay heat and auto start of the diesels. U2 did not initially suffer switchgear damage, however the collapse was so violent that U2 turbine tripped from it. The front standards of the turbines are at opposite ends of the Train Bay.

About 10 minutes after U2 tripped the offsite transformer(SU3) feeder breaker catastrophic failed resulting in loss of offsite power and unit 2 going onto diesels. As of midnight last night both units remained on EDG power with no immediate time when normal power restored. Today investigators begin their efforts to determine what happen.

The destruction also includes the Ops Extension and minor damage on the Ops Block House. (redacted) said the Ops Block House only suffered a crushed door. The machine shop below as heavily damaged with its wall adjacent to the Train Bay collapsing. The Switchgear Mezzanine on U1 has significant damage and total loss(crushed) of the A1 & A2 switchgear. Currently the turbine decks and the train bay are red flagged off. ”

This image from the accident has been posted various places online 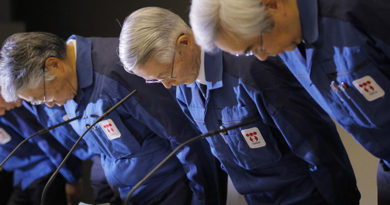 An In Depth Look At Japan’s Rokkasho Nuclear Facility