This is an ongoing update of headlines and information related to the coronavirus outbreak. Newest information at the top. If you have a question or want to discuss this issue in depth, we have been discussing this issue in our chat system. Information is updated throughout the day with a large update every morning US time.
Bookmark Covid19.SimplyInfo.org to always get the newest live blog page as we have to close and open a new page periodically to improve load times.

Yesterday’s headlines from 3.25 can be found here

US virus tests per day 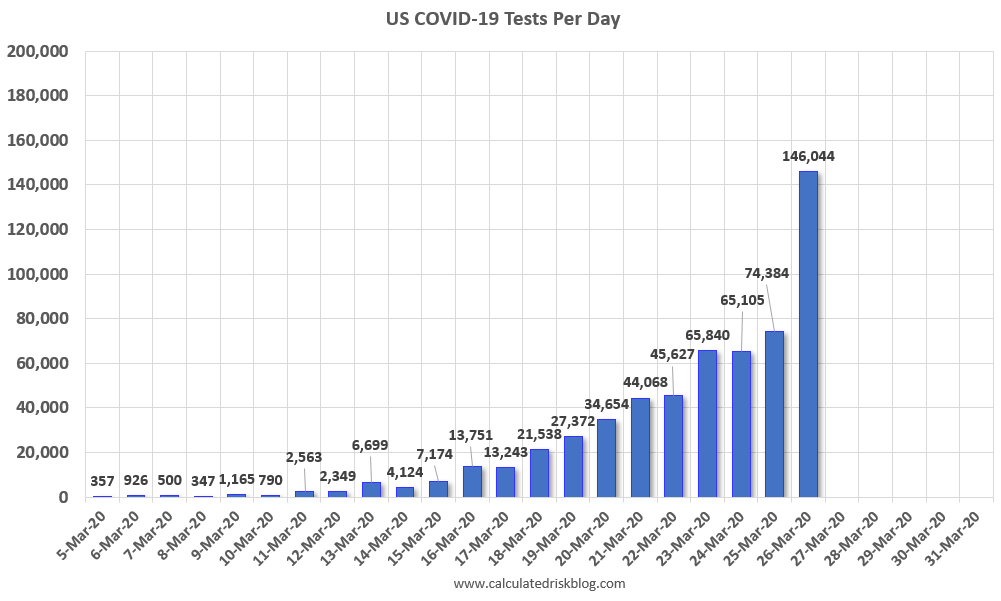 US FDA and White House cite a Chinese study to explain why they refused to import the WHO virus tests. The Chinese study was retracted before anyone in the government cited it. The abstract of the study says nothing about test effectiveness and the WHO test is from Germany, not China. This citation about test ineffectiveness has been used as an excuse for why the US failed to roll out testing in a timely manner.

US has the most cases in the world, even with insufficient testing

Health care workers may be the next shortage as many fall ill.

Vox has state by state graphs of their virus data

NYC hospitals crowded with the seriously ill, moderately ill and the worried well. If someone doesn’t have the virus when they come in, they probably leave with it.

USS Roosevelt headed to Guam with a virus outbreak on board.

US not over reacting, comparing US and Italy virus curves

US federal prisons to send home some at risk inmates

Brooklyn teacher didn’t get virus test until 3rd visit to a provider, even with symptoms

Navy will test thousands of sailors on air craft carrier

Dyson vacuums developed a ventilator in 10 days. They are making 15,000 of them right ow.

Woman facing criminal charges after purposely coughing on $35,000 worth of groceries.

The Four Seasons hotel in NYC has offered up all of their rooms free of charge to health care workers at NYC hospitals. With workers pulling long shifts, the hotel rooms provide somewhere to sleep since many would have long commutes home.

FBI kills domestic terrorism suspect who was plotting to bomb a Kansas City hospital amid the outbreak there.

We found that certain vitamins were difficult to obtain. Vitamin B12 is experiencing shortages. This could be manufacturing lag from the outbreak in China or people rushing to buy it thinking it might protect them from the virus. There have been runs on Vitamin C due to incorrect information that vitamin C would act as a preventative. It does not specifically ward off the virus. Baking yeast has also been impossible to find anywhere. WaPo explains that everyone baking at home appears to have snapped up all of the available yeast in the US.

Over 3 million people in the US filed for unemployment last week.

Virus tests in Prague, donated by China were giving an 80% error rate. These are antibody quick tests, rather than looking for the presence of the virus. Since people don’t start to show antibodies for up to a week, the tests were giving false negatives.

Sweden has resisted taking the same precautions as other countries. Experts worry this will backfire.

Nearly half of patients in San Jose Kaiser hospital have virus 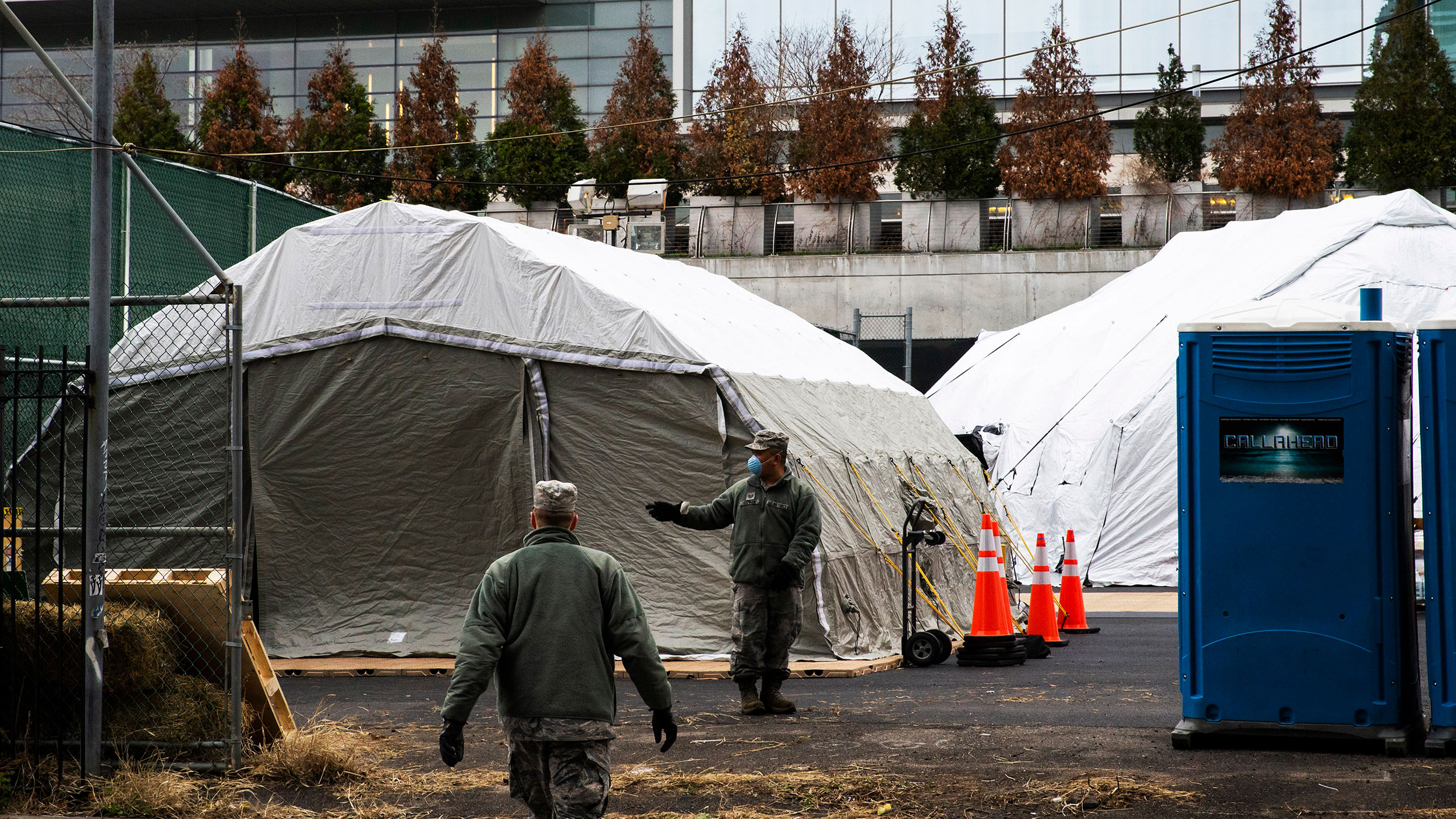 Two Boston hospitals have over 40 infected health care workers each

1 million people have filed for unemployment in CA

March 25 Update: US COVID-19 Tests per Day #TestAndTrace https://www.calculatedriskblog.com/2020/03/march-25-update-us-covid-19-tests-per.html The US conducted 74,384 tests in the last 24 hours. Note: About 16% of tests were positive in the most recent report (some are still pending). The high percentage of positives indicates limited testing. For Test-and-trace to be effective, the percent positive would probably be at 5% or less. 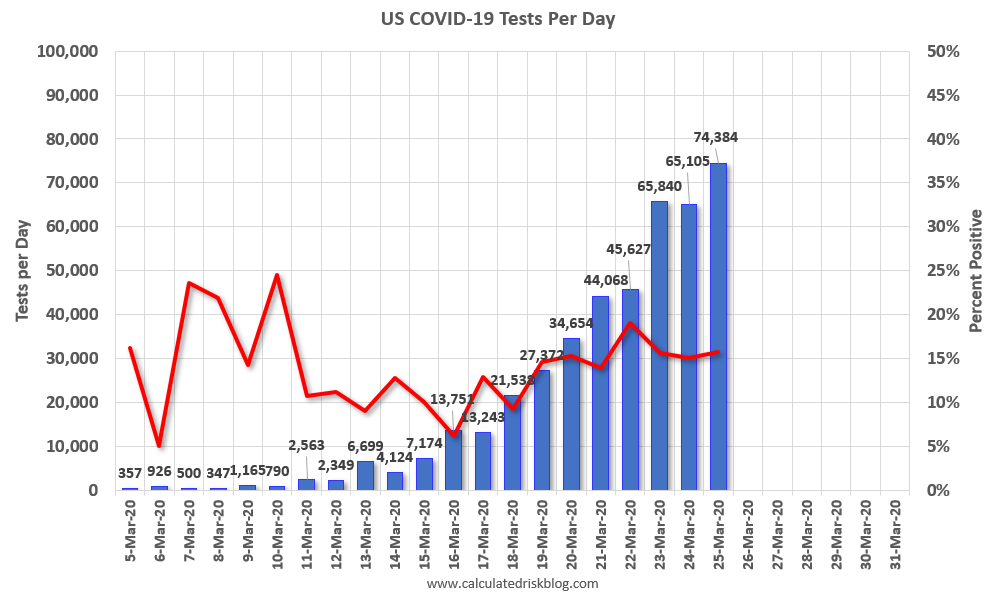 US DOJ says people intentionally spreading virus could be charged under terrorism laws.

India is forcing people into mandatory quarantine facilities that may actually accelerate infections.

94,000 migrant workers return to India from all over the world, raising worries they bring the virus with them.

Seattle NPR station will no longer carry White House virus briefings citing misinformation after Trump suggested a drug as a cure all resulting in at least one death.

2 more cruise ships headed to Florida with virus cases onboard

What the 1918 flu pandemic tells about human nature