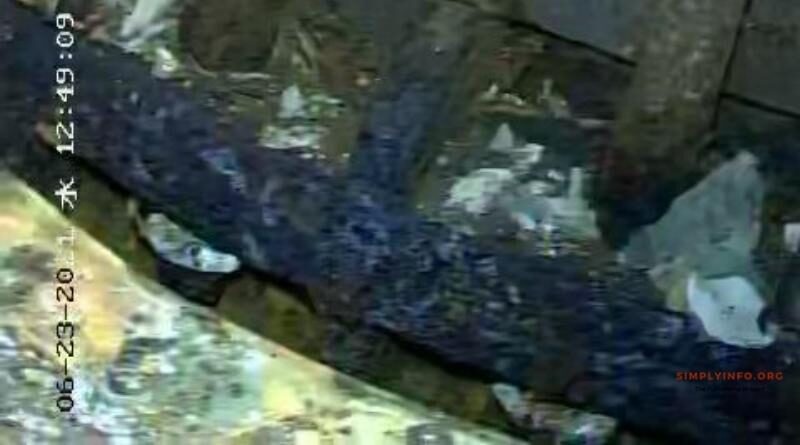 An inspection of Fukushima Daiichi unit 2 in June of 2021 shows a fatal design flaw of the BWR reactors that may have contributed to their destruction.

The inspection conducted was of the reactor well area of the reactor. Earlier work at this reactor unit found a highly contaminated reactor well differential pressure line outside of containment. Our reporting on that can be found here.

The inspection inside the reactor well found some significant new findings. The edge of the containment cap is black and charred. Different from the rusty and general corrosion found on the unit 1 containment cap. The containment cap is a know likely failure route for reactor containment in a severe accident. The bolts that hold down the containment cap can elongate due to high pressure and high heat. The silicone seal for this cap has a maximum temperature rating of 620 f (320 c). Evidence of this type of failure was found at units 2 and 3 during the initial disaster and on later inspections at unit 1.

Unit 2 did not suffer a hydrogen explosion. This was likely due to the blow-out panel being dislodged prior to unit 2’s final failures. Unit 2 had a massive plume of highly radioactive steam out of this blow-out panel for weeks after the initial meltdown. In 2012 there was still a plume of steam escaping out of the reactor well. 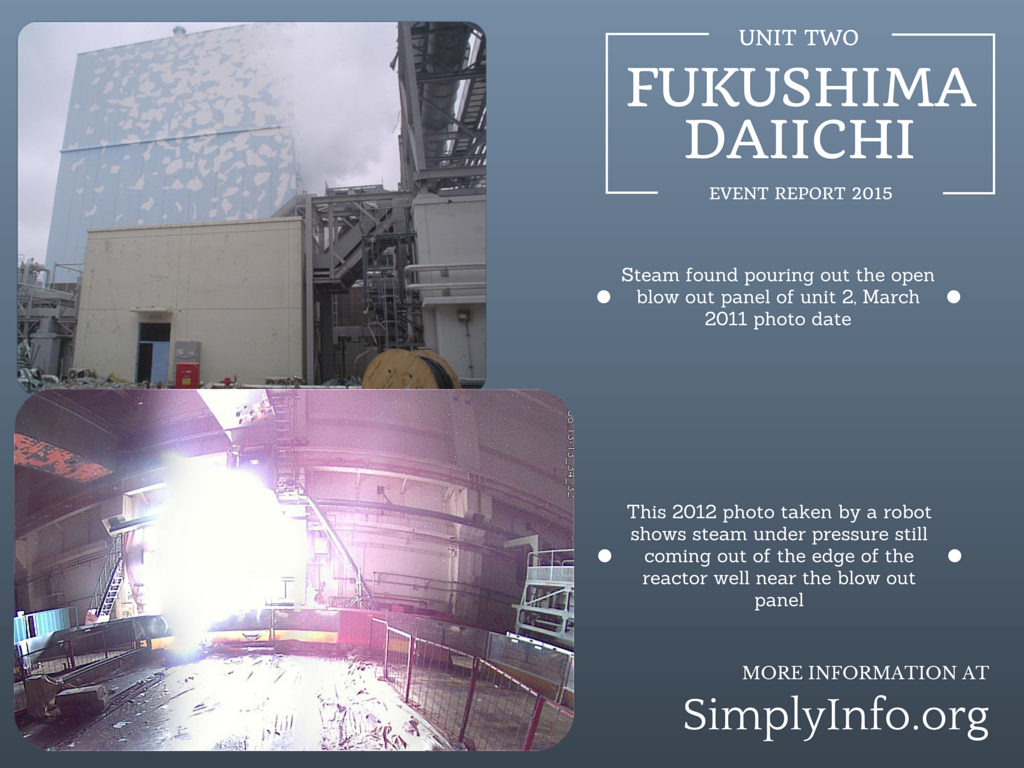 This refueling floor has been off-limits to workers since the initial disaster due to high radiation levels and microparticles of fuel spread around the area. In 2021 TEPCO puts a probe into the reactor well consisting of a camera, radiation meter, and light. The radiation levels are not incredibly high compared to some earlier readings found at the three damaged reactors but it is now almost 11 years post-meltdown, these levels have significantly reduced compared to what they would have been in 2011. 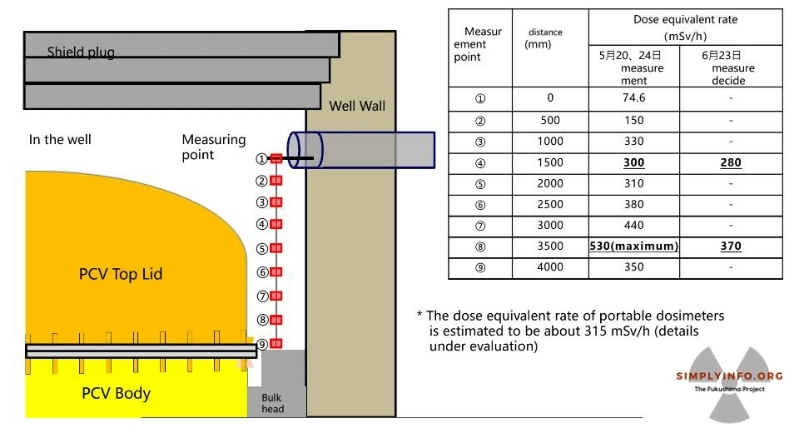 This series of images below show the charred damage to the flange of the containment cap. 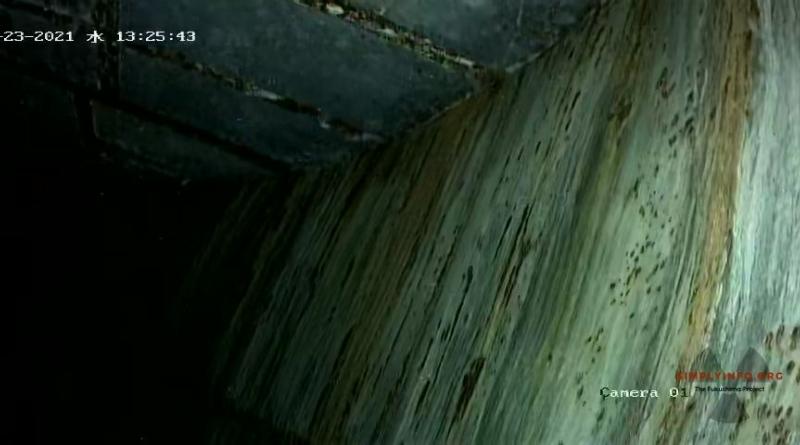 Outer reactor well wall (above). This was originally polished stainless steel.
This reference photo from unit 1 prior to the 2011 disaster shows what this area used to look like. 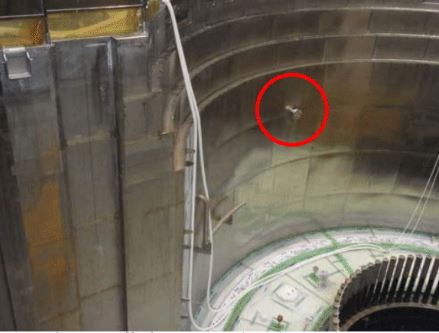 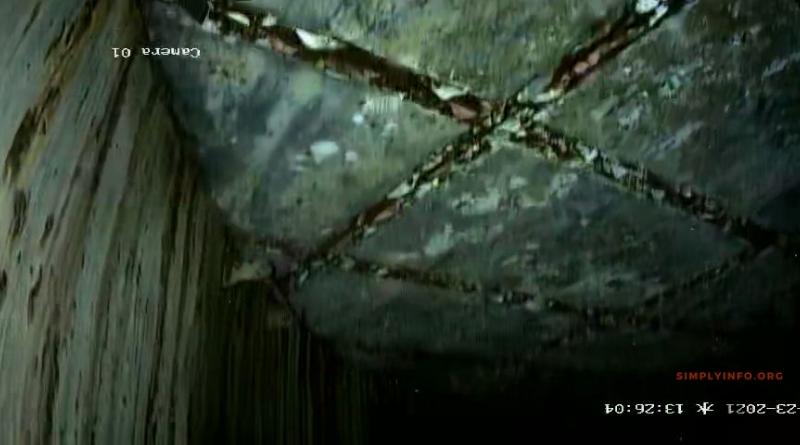 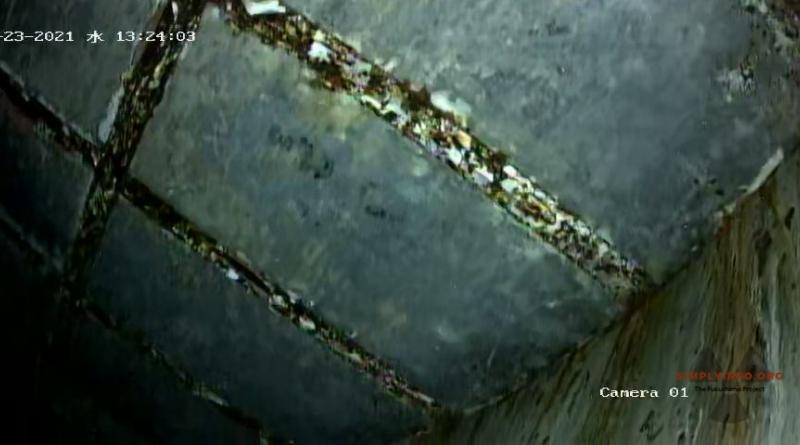 The image below shows a close-up of the containment cap flange and bolts. Heavy dark charring can be seen on the flange. 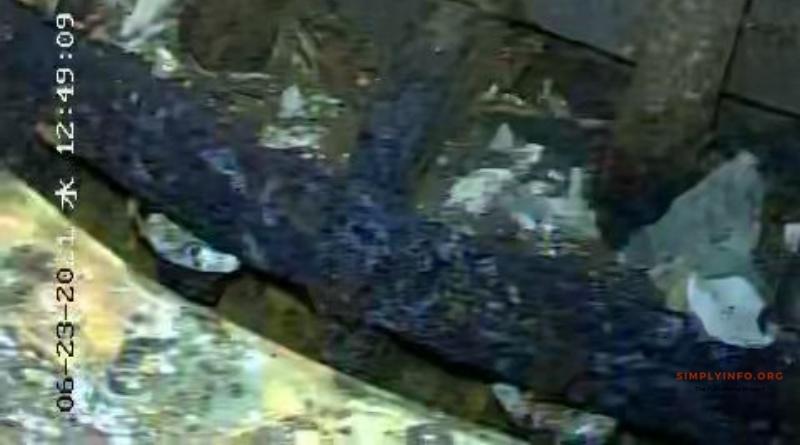 This pair of images below show the side of the containment cap and the flange area. The cap is heavily corroded and charred at the flange. 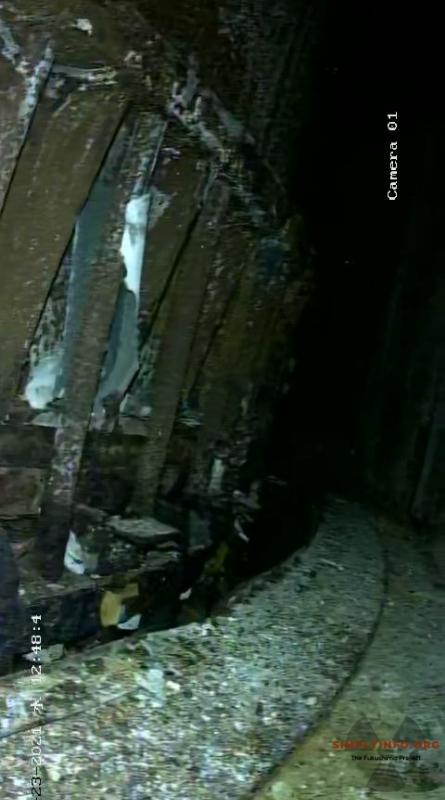 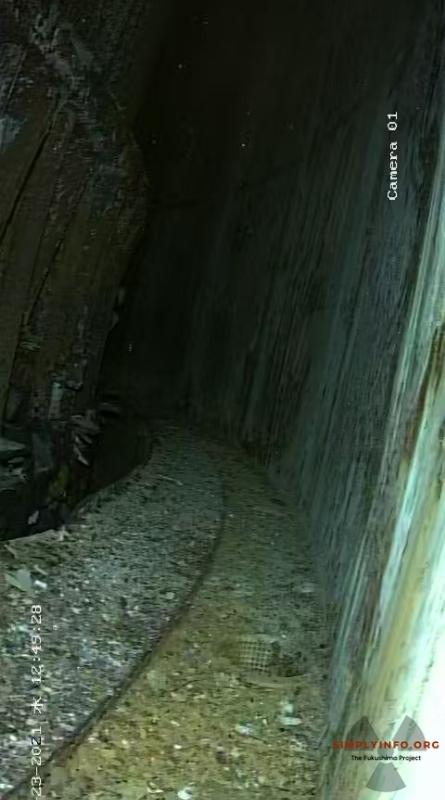 The pair of images below show a further close-up of the charred flange. 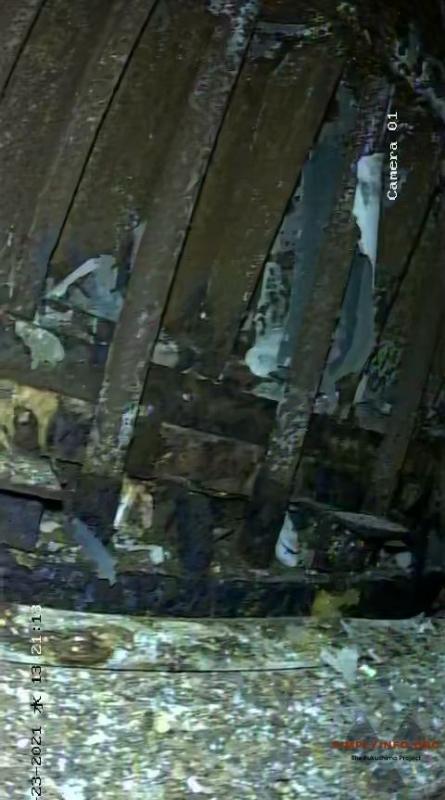 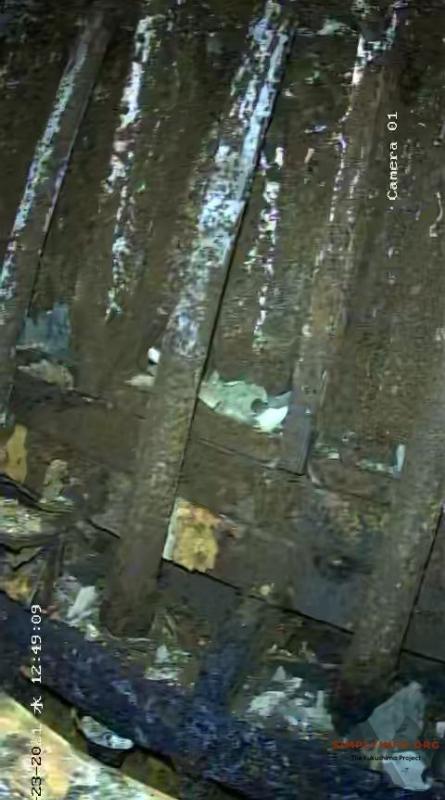 This pair of images below shows a closer look at the charred flange. Some concrete spalling can be seen on the bulkhead. 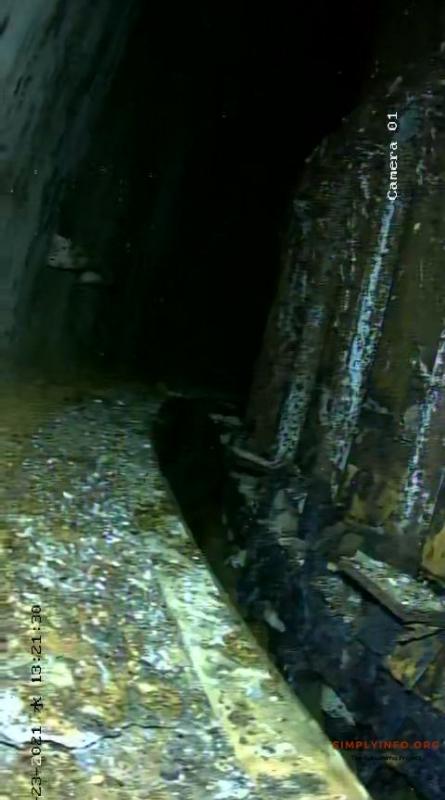 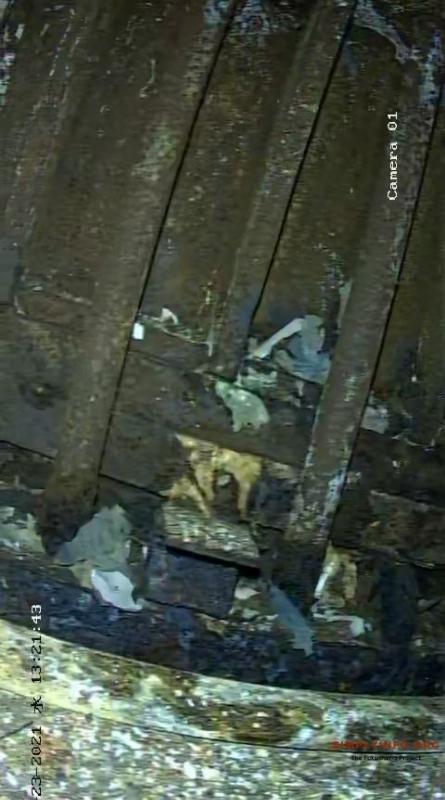 So where is that fatal design flaw? The differential pressure line was mentioned earlier in this report. This line connects into the ductwork for the air conditioning and building ventilation system. Under normal operation, this would pull any potentially contaminated air into the ductwork and out via the filtered ventilation system. Under severe accident conditions, this created a direct route from inside containment to the reactor well, into the ductwork. TEPCO had previously cited hydrogen circulating through the ductwork of the reactor buildings as the likely cause for extensive building damage from the hydrogen explosions. The leaking containment cap provides the means for the radioactive gasses, vaporized fuel, and hydrogen to further escape into the building. Unit 2 did not suffer a hydrogen explosion as units 1 and 3 did. This has been assumed to be due to the dislodged blow-out panel giving a route for hydrogen to escape the building, keeping the total hydrogen concentrations below the threshold where they would be combustible.

This information helps confirm that unit 2 did have a major event related to the meltdown at that unit via the containment cap. Unit 1 did not have
damage to this degree. Unit 3 has not had the reactor well inspected to date. 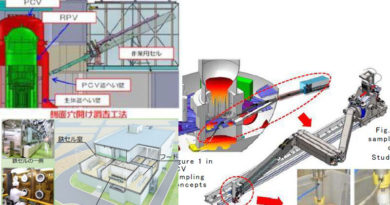 The Plans For Fukushima Fuel Removal 2018 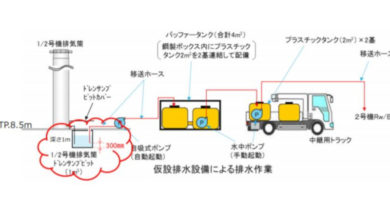 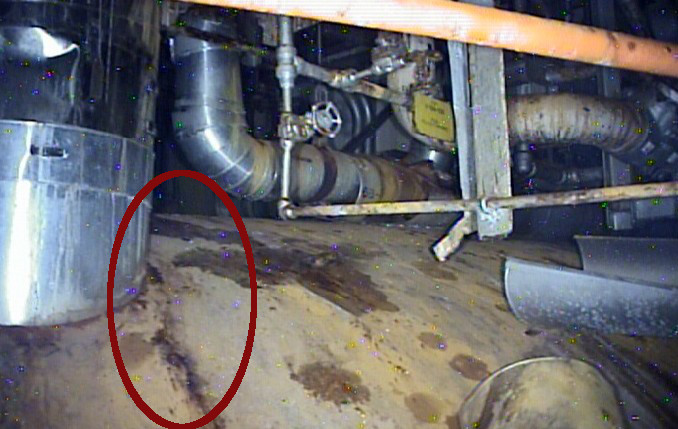