TEPCO released two reports in Japanese last week on order of NISA to explain the soundness of unit 4. Our rough machine translation is available here.

The two extensive reports in Japanese were not made available in English. TEPCO has made an abbreviated version available today in English that omits or abbreviates a large amount of very critical information including the seismic statements and floor damage report details among others. TEPCO also released another document in Japanese late last week that has more data on the seismic determinations but was less publicized to the press and the public.

In May 2012 we reviewed TEPCO’s available documents on unit 4’s stability and explained them in detail here, and a July 2012 follow up. There are some very critical new admissions from TEPCO in the August 2012 reports that they appear keen to gloss over with the media and in their English language reporting. This recent Asahi Shimbun article seems to have missed the issues TEPCO reports and instead parrots TEPCO’s carefully crafted illusion that unit 4 is structurally sound.

We reported yesterday on TEPCO’s poor photoshop attempt to block out the garage entrance on newer photos.

The new reports make some key admissions. The west and south walls are degrading and also may have been worse than TEPCO had previously admitted. Floor damage is also expanded from what was previously reported. Cracks on the inside of the west wall was also reported for the first time. It appears some of this is building degradation and some is new findings as they gain access to more areas of the building for closer inspections.

TEPCO’s Japanese report talks of seismic resistance, the English version makes no mention. In the Japanese version TEPCO vaguely cites the ability to resist “6+” on the Japanese seismic scale. We received a first hand report from someone who attended a public meeting with TEPCO that this is not the full extent of the story on seismic stability. When pressed TEPCO admitted the “seismic 6” is only vertical shaking and not horizontal shaking. They also admitted they do not have a staged plan to deal with the potential for a fuel fire in the spent fuel pool if it were to devolve to the point where water could not be usedt. TEPCO’s statement was that they had a water crane standing by. There was no mention of having any other fire fighting substances. Gundersen also cites this issue of no alternative fire fighting for unit 4, in a recent video where he spoke with Green Action Japan.

The admission that the quake testing does not take horizontal shaking into the equation is critial. The west wall already has issues with stability and the building supports to the west of the spent fuel pool are destroyed. These two issues make horizontal movement an issue.

The west wall from the May 2011 report shows failure (green) over the upper floors and part of 3rd floor. The blue section deemed to be partially sound.

The August 2012 report in Japanese shows the west wall (upper left of diagram) with 5th floor removed. The 4th floor as failed with the entire 3rd floor now failed with half of the 2nd floor now partially failed. In May 2011 the 2nd floor was assumed sound. This newly declared partially damaged area is above the garage door opening TEPCO has attempted to photoshop out of recent images. 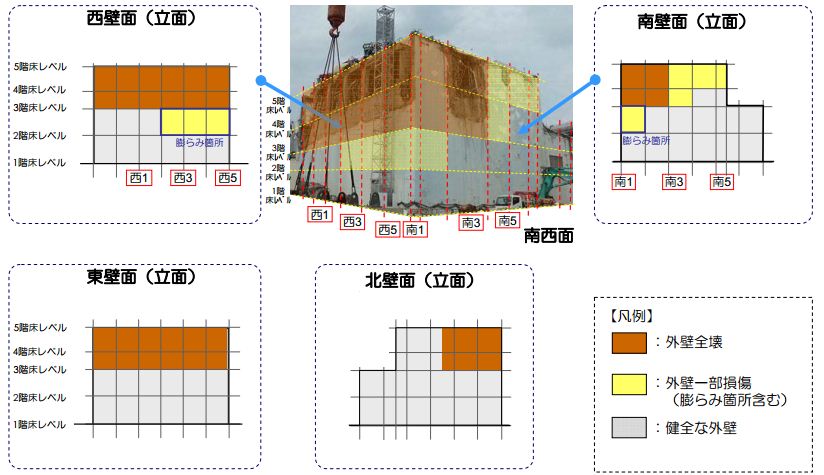 The August 2012 (south wall upper right in diagram) report shows the area above the refueling floor gone, two new sections to the west as now failed and adds sections of the 4th, 3rd and 2nd floor as partially failed. This includes areas of the outside wall facing the spent fuel pool. This section does not fully support the pool itself (there are additional structures between the outer wall and the pool). It still adds to the general concern of building stability and available additional support in that region of the building.

Additional floor areas have been cited as being failed or degraded from earlier reports. The May 2011 report shows roof damage, 3 sections that “may be” damaged on 5th floor and two sections that may be damaged on the 4th floor. No floor damage is cited on 3rd or 2nd floor. 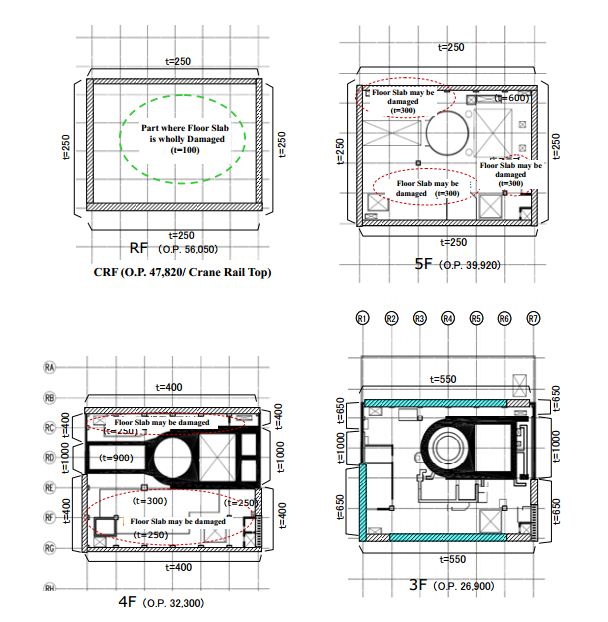 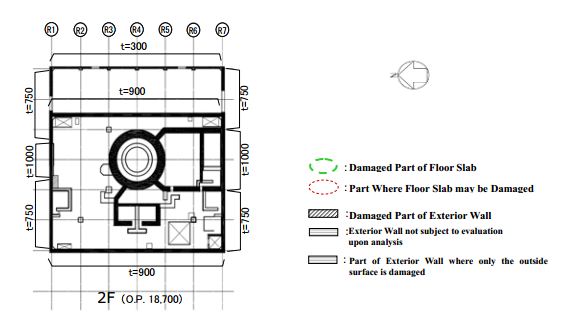 The August 2012 report shows some detail of the floors in the main press handout. Buried deeper into a more technical document, details about the floors were found. The 5th floor now has a section of totally failed (rust color) with additional areas of partially failed floor including a large portion of the west floor. This includes the area that was under the yellow containment cap. The 4th floor now shows with more accuracy what areas are partially damaged, in May 2011 they were labeled as possibly damaged. The 3rd floor was reported as undamaged in May 2011 but now shows with a section of failed floor (rust color) and two considerable sections as partially failed (yellow) floor. There is also a blue wall section marked on the 3rd floor floor diagram. This is noted as a totally failed wall section and is new. 2nd floor shows no details for the floor in the new reporting. Green on these diagrams signifies partially failed wall sections. 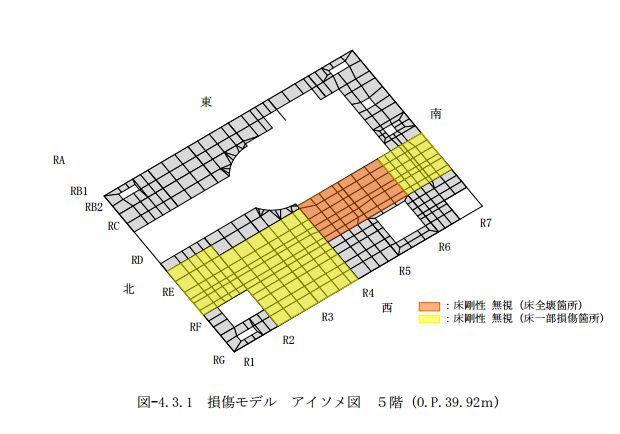 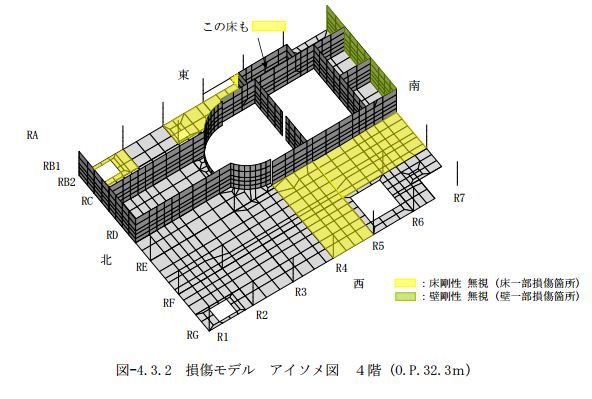 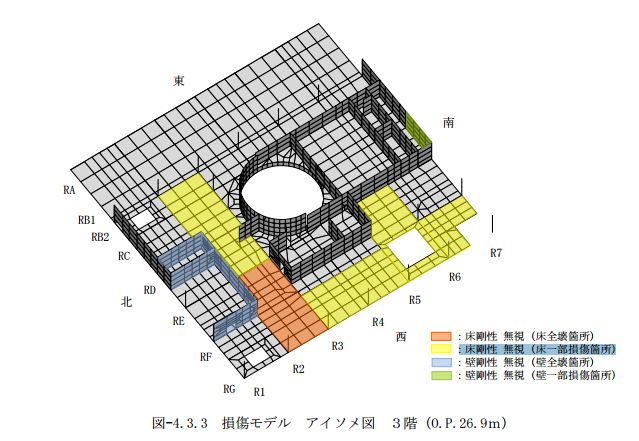 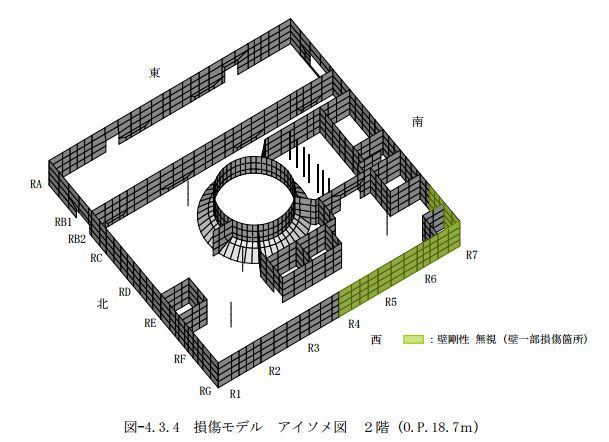 Also new in the August 2012 report are wall cracks along the interior of the west wall. TEPCO cites these as being new findings but states they are only on the inside wall surface and not on the outside wall surface. The cracks are all on the 2nd floor sections of the west wall, much of this section was newly designated as partially failed. The three cracks cited are labeled as August 10, 2012 as the date of measuring. 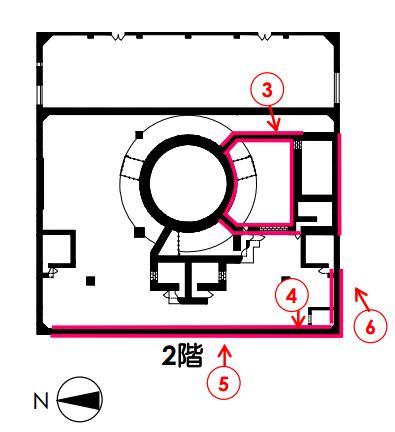 West wall is the one in the bottom of the diagram.

Some of the inner 2nd floor west wall cracks: 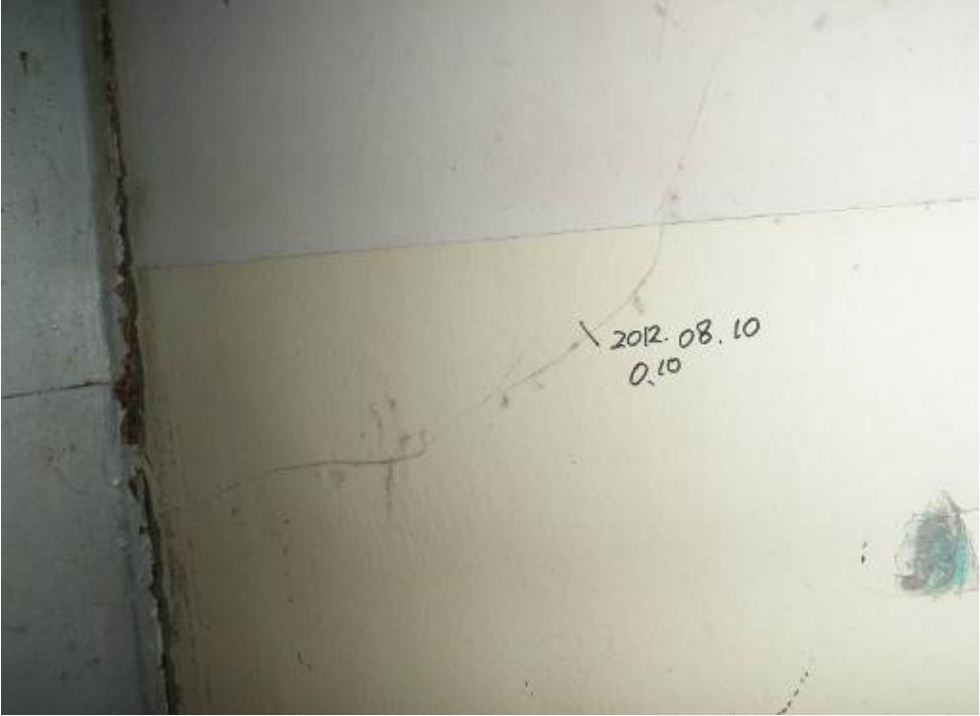 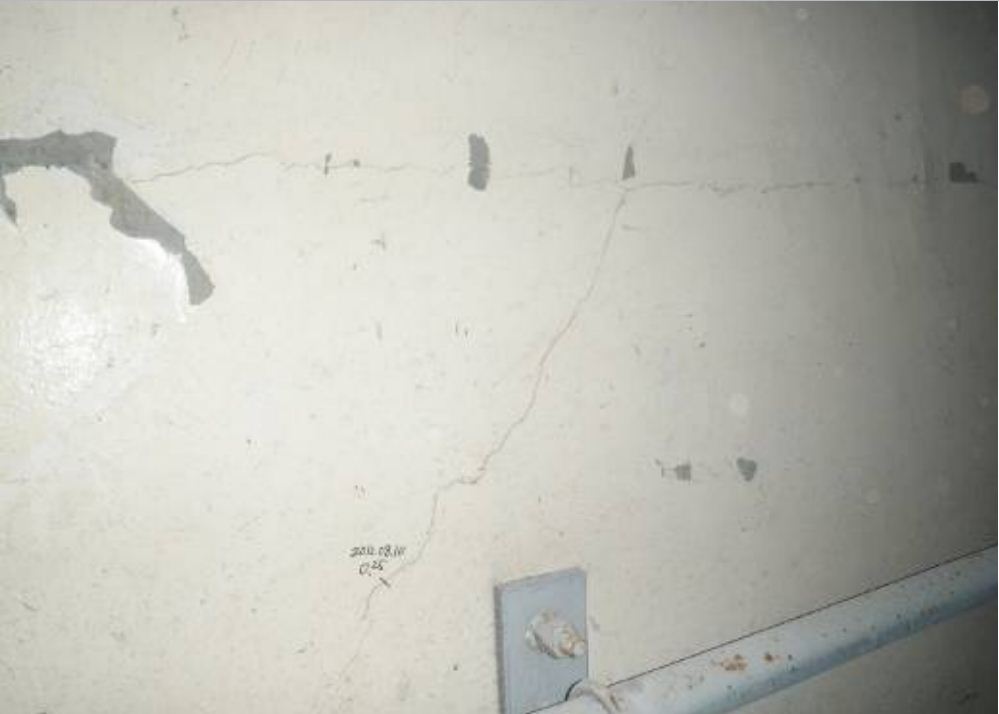 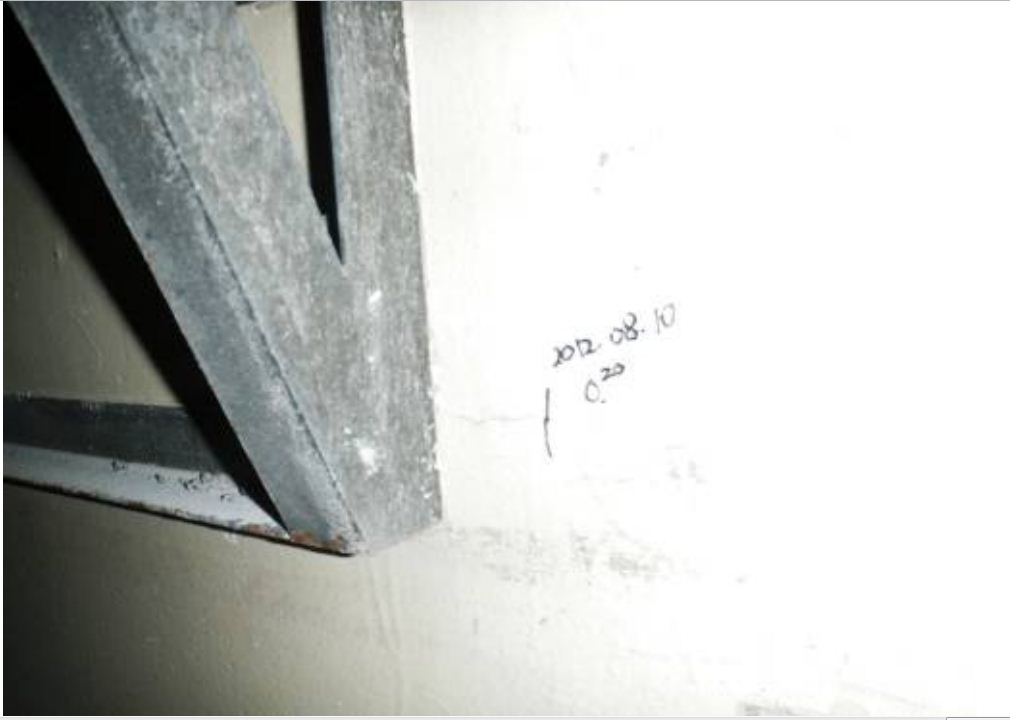 The new report uses May 2012 to June 2012 wall distortion movements. The measurements are in millimeters so the changes are very small. Even a new undamaged building may not be totally straight so some measurements outside of a perfect alignment would be expected. The changes and where they occur are of note and should be watched closely for more signs of trouble. The blue parenthesis show the change over one month. These readings were taken before the gear on the west side of the refueling floor wa removed. That gear included the yellow containment cap, all the concrete slabs that make up the reactor well cover, the steam dryer, reactor cap and reactor cap device. It would be useful for TEPCO to take readings now, since most of that gear has been removed. Total failure of the west wall is a concern as it could cause damage to other portions of the building. More reporting and some sort of plan in case the wall would fail would be useful. The wall does not appear to be in imminent danger of collapse but should be closely watched. 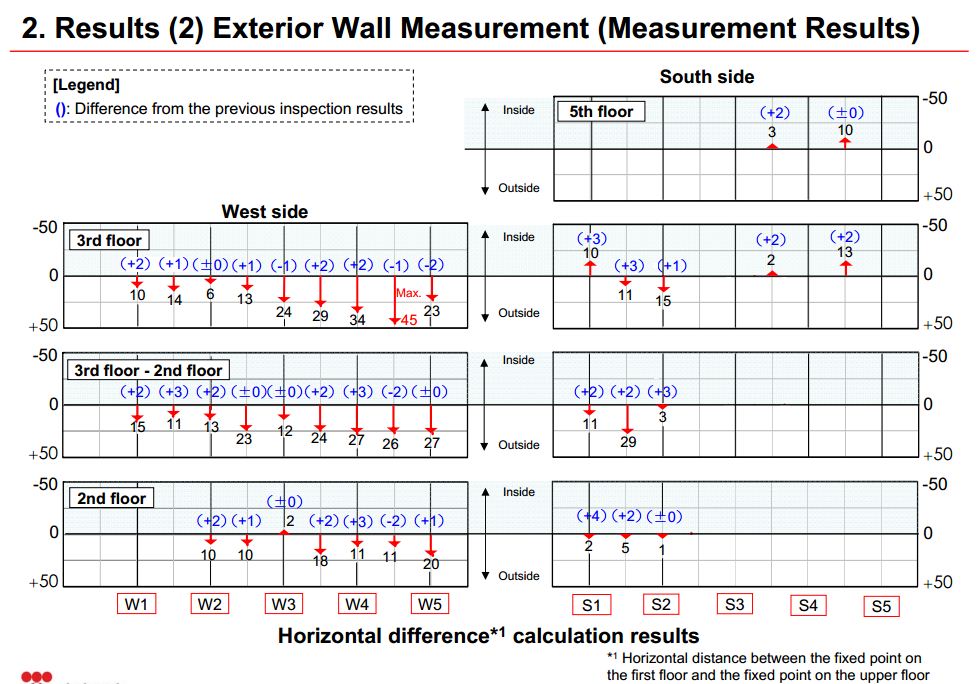 The new information about more wall damage, more floor damage and TEPCO’s various admissions about unit 4’s ability to withstand another earthquake as usual seem to raise more questions and create new concerns. TEPCO has admitted that their claim of the building handling a seismic 6 event is only a vertical shaking, not horizontal shaking and does not incorporate the time span of the shaking. The extent of the building damage is wider than originally admitted or understood. This may not be totally a case of misleading by TEPCO. There is more ability to inspect now than there was in 2012, Much of the rubble has been removed allowing people in to inspect areas they could not reach before. So this may be a mix of the building degrading and better understanding of the damage.