Along with the new information about the situation inside unit 1’s containment came some confusion online about the torus situation at unit 1. The Denki Shimbun reported recently that unit 1’s torus had ” a dose rate of about 10 Sv/h was observed in both the PCV and torus chamber.”

This omits the significant findings in the torus of unit 1. TEPCO documents the very high readings found under water in the torus as “values of 108 to 109“. TEPCO found levels of 10 Sv/h in the air above the water in unit 1. The water surface was about 8 Sv/h, dropped into the 2-3 Sv/h range briefly then went into these incredibly high readings in the depths of the water inside the torus. TEPCO does cite instrument failure as “However, the dosimeter seems to have failed as it indicated order values of 108 – 109mSv/h during the measurement and the values did not change until the dosimeter was brought back up.” The instrument did not fail high and stick there, it was able to recover. If TEPCO had simply had an instrument failure they would not have documented and published these high radiation findings. Instrument failure is frequently cited in TEPCO’s documentation when they run across readings they can not give exact numbers for or where they go over an instrument’s capability.

Denki Shimbun’s report may have given some people a false understanding of the situation inside the torus of unit 1. If people read TEPCO’s documentation they would be aware of the actual situation in unit 1.

Looking at only air dose radiation (not in water readings) of units 1-3 in the torus room of each unit it shows the large disparity of radiation levels in the three units. Levels are all in mSv/h and taken from TEPCO’s survey work cited above. 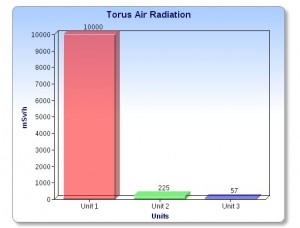 Accident progression data showed that the three units had very different radiation readings over time in the drywell and torus.
Unit 1 saw high radiation at the drywell B sensor that was as high as 500 Sv/h in the latter half of 2011 then went on a gradual decline towards March 2012 to between 30-3 Sv/h.
Unit 1 torus readings (inside the torus, not torus room) were at about 60 Sv/h on March 18th then gradually dropped to just below 1 Sv/h by mid April 2011
Unit 2 saw high radiation in the drywell on March 16th of 150 Sv/h than quickly declined, then a peak of 150 Sv/h in the torus in April to May 2011 that also quickly declined.
Unit 3 saw a drywell reading of about 180 Sv/h on March 14th that gradually dropped off by mid May 2011, torus readings never spiked in unit 3.

While there is still much to learn about the progression of events at Fukushima Daiichi, the currently available information does show a clear pattern of a different scenario at unit 1 and one that shows unit 1 suffered a severe meltdown.