The mainstream media, late to the game has confused the leaking at Fukushima. Some reported as it if has not actually happened yet. Here are the ways Fukushima Daiichi leaks.

The ancient underground river that flows beneath the plant is assumed to move 1000 tons of water under the plant and most of it out to sea every day. TEPCO pulls 400 tons of that out of the reactor buildings daily as it mixes with the contaminated water in the buildings. The remaining 600 tons is assumed to flow out to sea each day with some of it becoming contaminated. Marine scientists have cited these types of ongoing leaks as the reason cesium levels in fish in the region have failed to decrease. This leak route is assumed to have been the case the entire 2.5 years of the disaster.

Wells dug in the sea front area show that these wells rise and fall with the tide, indicating a direct connection to the sea.

TEPCO admitted in recent months that a cable tunnel filled with highly radioactive water in the first weeks of the disaster was never fully sealed and emptied. They also admitted this tunnel has a gravel bottom, allowing this water to leak further way and into the groundwater or the sea. Now TEPCO says they will try to empty the tunnel.

TEPCO has also admitted that the turbine building basements where highly radioactive water has been left and stored as part of dealing with the massive amounts of water at the plant is leaking out. This water may be leaking directly into the ground. This is certainly possible through cable tunnels and sump holes normally used to pump out ground water.

The reactor buildings have at least 590 holes in the building below the ground water level where contaminated water can leak out. In our research of building plans of the reactor buildings we found further leak routes including doorway openings into an adjacent building from the torus room.

This week TEPCO admitted that the surface drainage system for the plant was never modified, blocked or filtered in any way. Surface water is still routed into drainage canals that connect directly to the Pacific. Rainwater and other surface water that comes in contact with all the radioactive dirt, dust and debris at the plant then transports that contamination out to sea.

TEPCO’s plan to use large holding ponds failed when they cut corners on the design. The ponds were originally intended to hold water treated by ALPS filtration that would have most radioactive contamination removed. When they ran short on space TEPCO dumped highly radioactive water into the defective ponds. Those ponds leaked contaminating the soil and groundwater nearby. TEPCO eventually moved this water to the above ground bolt together tanks but not before tons of this water leaked out.

TEPCO has more recently admitted that the bolt together tanks are leaking at a growing rate. Some of these tanks hold highly radioactive waste water and are only rated for five years of use. The more recent leaks show that these tanks may be deteriorating more rapidly or have more defects than initially assumed. At least one of these tanks leaked 300 tons of highly radioactive water into the soil at the plant. Some of that water is assumed to have made it out to sea.

TEPCO admitted this week that there is a mass of highly contaminated groundwater beneath the reactor and turbine buildings and that this mass is moving towards the sea. The media has frequently confused this with the other ongoing leaks that have already contaminated the sea. Experts now expect that mass of highly radioactive water to be near or already leaking out the sea front of the plant.

Adding to the concern about this is that TEPCO either does not know or will not tell where the melted fuel from the 3 reactors is at. This leaves a huge unknown factor. How much of the melted fuel has ended up in this groundwater mass. We do know that water in the unit 1 torus room was highly radioactive and water found in the unit 3 turbine building was highly radioactive. Water in the basement of unit 2’s turbine building has been untested with just one reading given for that lower level that was too high to send workers further.

Daiichi leaks in a variety of ways, all of them problematic and without immediate solutions. 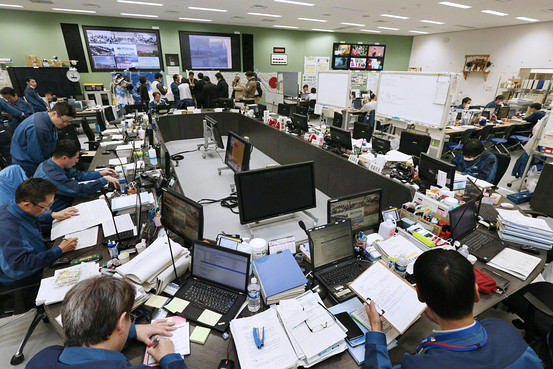